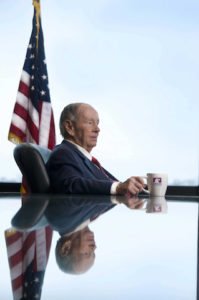 Indexed annuities lost a long-standing champion of the product category earlier this year when David J. Noble, founder of American Equity Investment Life Holding Company, passed away back in April at the age of 85.

But his legacy lives on, and grew again recently when NAFA, the National Association for Fixed Annuities, honored Noble (pictured left) posthumously as the recipient of its 2017 Bo Johnson Spirit Award for Lifetime Achievement.

The award recognizes courage, spirit and determination that challenges the status quo, inspires others to achieve, contributes unselfishly to others, and works ethically and conscientiously to improve the fixed annuity marketplace.

Adi Johnson, the daughter of Bo Johnson who is memorialized by the award, made the announcement in front of a packed house in San Diego during NAFA’s ninth annual Annuity Distribution Summit held last month. The award was accepted by Noble’s daughter, Cindy, prior to the event, and a video of her acceptance was shared with those in attendance.

Additionally, NAFA board member Kirby Wood, chief marketing officer of West Des Moines, Iowa-based American Equity Investment Life Insurance Company, and others from the American Equity team delivered a meaningful tribute to Noble, providing highlights of his tenured career and detailing why he exemplifies the qualities of a true leader in the financial services and insurance space.

“Mr. Noble was committed to a people-first approach. He often said, ‘A successful business is not a building or a charter …it is the people.’ Mr. Noble built a company with great people, competitive products, and a differentiator of providing best-in-class service to our policyholders and field partners. That mindset and dedication to exceptional customer service laid the foundation for American Equity and remains strong today,” said Wood.

Noble founded American Equity in 1995 with more than 40 years of experience in the insurance industry under his belt and a passion for helping people. He served as chairman, CEO, president and treasurer of his company simultaneously until Jan. 1, 2009. Throughout that time, he worked tirelessly to meld exceptional products with outstanding service for every American Equity policyholder. He was an early champion of fixed indexed annuities, helping pioneer their sale to individuals interested in a fixed minimum return that can increase as financial markets climb and create predictable income they cannot outlive.

Noble was also a leading voice of the successful industry effort culminating in 2010 to keep the SEC’s controversial proposed Rule 151A from regulating indexed annuities in the same way variable annuities are regulated.

The U.S. Court of Appeals struck down Rule 151A in July of 2010 in a case called “American Equity Investment Life Insurance Company, et al. v. Securities and Exchange Commission” on the grounds the SEC had not proven the new regulation would promote efficiency, competition and capital formation.

In addition to his role as a businessman, Noble was an active philanthropist. The Drake University alumnus donated $1.5 million to his alma mater to establish the David J. Noble American Equity Center, a state-of-the-art collaborative learning space with industry-standard business tools that opened in 2015. The university honors a rising fourth-year student within the College of Business and Public Administration each year with the David J. Noble Commitment to Excellence Award, “who most closely demonstrates the core values that define David J. Noble, including unyielding focus on always doing the right thing and never settling for anything less than total effort.”

“We’re incredibly pleased that the selection committee has chosen to honor the late David J. Noble as this year’s Bo Johnson Spirit Award winner,” said Chip Anderson, NAFA’s executive director. “As a by-product of his dedication and drive, he established high professional standards among annuity professionals and groomed many of today’s industry leaders. His commitment to excellence, never-give-up attitude and willingness to overcome adversity were an inspiration to everyone who knew him, and his contributions to the industry will never be forgotten.”

NAFA’s Insurance Marketing Advisory Council (IMAC) established the award in honor of Bo Johnson, who was well known for his energy, enthusiasm and love of the fixed annuity industry. As a proud member of NAFA, Bo served on the board for several years and was the original IMAC chair. His life was cut much too short when he died in 2009 after a courageous fight with cancer. He exhibited the attributes outlined in the award created in his name and left a very positive and lasting imprint on the annuity industry.

About NAFA: The National Association for Fixed Annuities is the premier trade association exclusively dedicated to fixed annuities. Its mission is to promote the awareness and understanding of fixed annuities by educating annuity salespeople, regulators, legislators, journalists, and industry personnel about the value of fixed annuities and their benefits to consumers. NAFA’s membership represents every aspect of the fixed annuity marketplace covering 85% of fixed annuities sold by independent agents, advisors and brokers. NAFA was founded in 1998. For more information visit http://www.nafa.com.