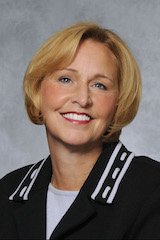 WASHINGTON, D.C. – The National Association for Fixed Annuities (NAFA) on Tuesday, Jan. 20, announced the retirement of Kim O’Brien, President & CEO, from the organization effective as of Friday, Jan. 16, 2015.

An ardent advocate for fixed annuities with 10 years at the helm of NAFA, O’Brien dedicated a large portion of her career to the fixed annuity industry. O’Brien played a key role in leading the membership of NAFA in promoting fixed annuities in her work with legislators and key members on Capitol Hill.

O’Brien and NAFA were at the center of the fight against the SEC’s ill-fated Section 151A, which when proposed in 2008 sought to reclassify certain annuity products as securities instead of as insurance products. The District of Columbia U.S. Court of Appeals vacated Rule 151A in 2010, which is also the year the Harkin Amendment was added to Dodd-Frank to ensure state regulation of index-linked annuities.

O’Brien told Insurance NewsNet that her sudden retirement from NAFA was due to intense pain in both knees to the point that it has become difficult to stand for very long, and the rigors and travel associated with the job were not allowing her condition to improve. Her retirement will allow her to get the medical care she needs before beginning a new chapter in her storied professional career.

A NAFA statement about O’Brien’s retirement said the organization will continue its mission and dedication to promoting the awareness and understanding of fixed annuities and their benefits to consumers. “NAFA is well-positioned for significant growth, due in part to Kim’s vision and leadership. We are confident Kim’s successor will have all the tools, staff, and resources needed to exceed NAFA’s goals in the future,” said S. Christopher Johnson, Chairman of the Board of Directors.

The NAFA Board of Directors has begun the process of finding a replacement to fill the position of Executive Director. During the transition, Janet Terpening, Director of Operations, will take over the duties being vacated by O’Brien.

NAFA, the National Association for Fixed Annuities, is the premier trade association exclusively dedicated to fixed annuities. Our mission is to promote the awareness and understanding of fixed annuities. We educate annuity salespeople, regulators, legislators, journalists, and industry personnel, about the value of fixed annuities and their benefits to consumers. NAFA’s membership represents every aspect of the fixed annuity marketplace covering 85% of fixed annuities sold by independent agents, advisors and brokers. NAFA was founded in 1998.