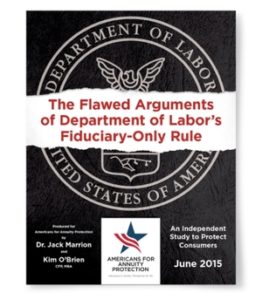 PHOENIX – The Department of Labor’s own evidence to support its new fiduciary-only rule actually undermines the DOL’s justification for its unwarranted disruption of consumer access to financial assistance from Main Street advisors, according to a study released July 2 by the Americans for Annuity Protection.

This lack of substantive evidence exposed in this report (“The Flawed Arguments of a Fiduciary-Only Rule”) shows that the DOL’s arguments “do not justify wiping out Americans’ ability to choose products that meet their needs, and an entire industry providing solutions for those needs,” says Dr. Jack Marrion, co-author who led the study and its research of the DOL’s proposed expansion of the fiduciary standard.

The Americans for Annuity Protection (AAP) supporters and Dr. Marrion are among the only parties who have actually studied the DOL’s justification well enough to see that the department’s proposal is built on a poorly constructed foundation, says Kim O’Brien, CEO of AAP.

“The study was necessary to show that the evidence provided to support the DOL proposal is misinterpreted, often misapplied and contradicts the department’s own conclusions,” O’Brien says. “Dr. Marrion’s research and key findings are instrumental to support AAP’s argument that the existing ERISA exemption for the sale of annuities must be retained. This is imperative so that all Americans seeking the certainty and security of annuities have access to affordable, unfettered and professional annuity advisors and annuity advice.”

At a time when Americans are growing more fearful of their retirement financial prospects, this bureaucracy is determined to remove options for ordinary Americans, says AAP Board Chairman Paul Feldman. “I have always believed in the value of annuities to remove the fear and anxiety of outliving our savings with guaranteed income for life and protection from stock market losses,” says Feldman. “This study will help to further our mission to protect America’s savers and their freedom to consider annuities for their security.”

Feldman says when he reviewed Dr. Marrion’s report, he was astounded that the DOL has been able to use such flimsy evidence to threaten a venerable profession that serves ordinary American families.

“People need to know the truth about the DOL’s case,” says Feldman. “Americans are about to lose access to advisors in their hometown and vital tools for their retirement security for no substantiated reason.”

• For a copy of this report, visit http://www.aapnow.org/dolreport

About Dr. Jack Marrion: Marrion leads the Advantage Compendium, which is a research and consulting service. He has conducted a broad scope of research ranging from the behavioral economic reasons on how consumers make financial decisions to industry impact models. He also serves as a Research Fellow for Webster University. His insights on the annuity and retirement income world have appeared in hundreds of publications including Best’s Review, Business Week, Kiplinger, The New York Times, The Washington Post, and The Wall Street Journal.

About Americans for Annuity Protection (AAP): Americans for Annuity Protection defends the rights of Americans to maintain their financial independence. AAP is a nonprofit 501c4 organization formed in 2015 by insurance and annuity veterans to provide expert advice to those making decisions that will impact annuities and Americans’ ability to consider an annuity. AAP is dedicated to preserving a diverse and competitive marketplace for annuities, serving Americans across the economic spectrum. With offices located in Phoenix, Washington, D.C. and Camp Hill, Pa., AAP is headed by Chairman Paul Feldman, Vice Chairman Kim O’Brien and Treasurer David Kefford. O’Brien and Kefford also serve as Chief Executive Officer and Chief Financial Officer, respectively.