The last time sales were at this level was in the first quarter of 2015.

Fixed annuity sales drove most of this quarter’s growth, which have outperformed variable annuity (VA) sales in eight of the last 10 quarters.

Fixed indexed annuity (FIA) sales were $17.6 billion, 17% higher than second quarter 2017 and 21% higher than first quarter sales results and in fact shattering a record for FIA sales in any quarter.

“This quarter’s FIA sales topped the record set in the fourth quarter 2015 by 12%,” said Todd Giesing, annuity research director, LIMRA Secure Retirement Institute. “Growth was widespread with all of the top 10 manufacturers reporting double-digit growth from the first quarter 2018. Clearly, with the Department of Labor’s (DOL) fiduciary rule vacated and the prospect of continued rising interest rates, demand for this product is high.”

Fee-based FIA sales were $67 million in the second quarter. Fee-based FIAs represent than one-half of one percent of the total FIA market.

“Despite introducing of new products and making changes to enhance their existing products to make them more competitive, companies are not having the same success with VAs as they are with fixed annuities,” Giesing said. “However, the new and enhanced VAs, combined with the vacated DOL rule and better economic conditions, have led to slightly improved sales.”

Fee-based VAs sales were $850 million in the second quarter. While this is a 49% increase over second quarter 2017, fee-based products still only represent 3.3% of the total VA market.

In the second quarter, registered indexed-linked annuity sales increased 6% from prior year to $2.5 billion. With rising interest rates, sales growth has slowed as other product options have become more attractive. Currently these products represent 10% of the retail VA market.

Sales of fixed-rate deferred annuities (Book Value and MVA) benefited from the higher interest rates, up 23% in the second quarter to $11.4 billion. Quarterly sales have not been this high since the first quarter 2016.

“We believe fixed-rate deferred sales will have a strong second half of the year, based on the prospect of continued interest rate increases,” Giesing said. LIMRA SRI predicts fixed-rate deferred annuity sales to increase 15-20% this year and as much as 25% in 2019.

The only annuity product that did not see positive sales growth was deferred income annuities (DIA). DIA sales dropped 4% in the second quarter, to $575 million. DIA sales were $1.1 billion in the first half of 2018, down 5% from prior year. 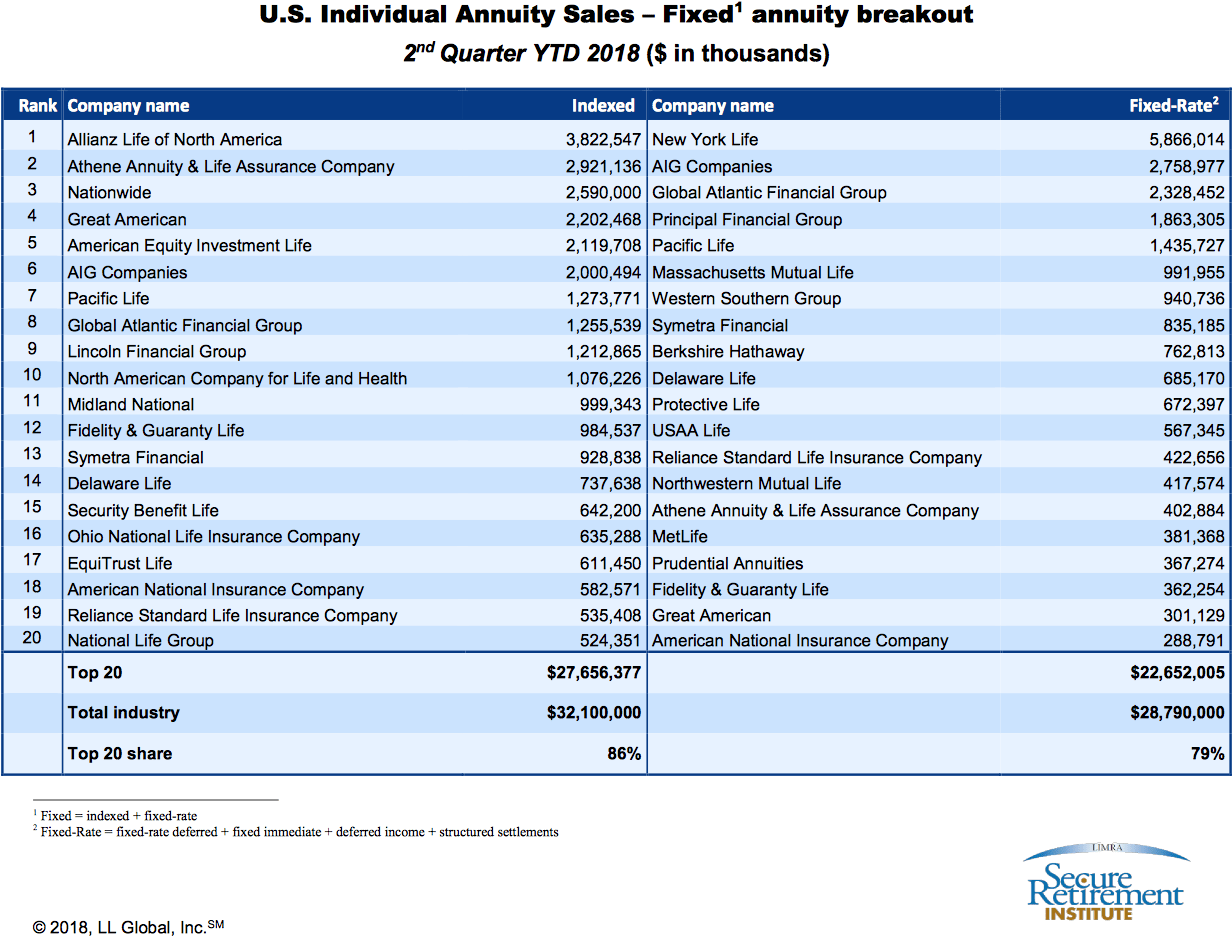