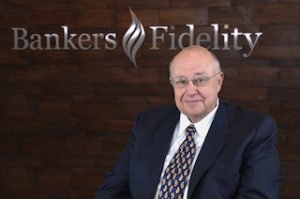 ATLANTA, Georgia, May 20, 2015 – Atlantic American Corporation (Nasdaq-AAME) today announced that Bankers Fidelity, the core company of its life and health operations, has appointed Bob Hines as its new President. Hines has over 25 years of experience in the life insurance industry, with the most recent 20 years at Bankers Fidelity, as a Vice President and most recently, as an Executive Vice President. To compliment his extensive industry experience, Hines has a BS in Business Management and Masters of Arts in Organizational Leadership from Shorter University in Rome, GA.

In his tenure with the company, Hines has been able to expand goals and knowledge that translated into customer satisfaction and company growth. A focus point of Hines’ new position will be to maintain the integrity, credibility and work ethic he has helped build within the company, “We are not going to sacrifice the fundamental values and principles that our leadership has long relied upon to enable us to be the company we have become,” stated Hines. Bankers Fidelity is excited for the industry knowledge, talent and motivation Hines will bring to the organization and how his attributes will translate into client expansion.

In a message to all Bankers Fidelity agents, Bob Hines stated, “As most of you know, it is a time of significant change within our organization. We are excited and optimistic about the many opportunities that lie in front of us. We are thankful to have the outstanding relationships we have built with each of you over the years. It is our hope that you see the future of Bankers Fidelity with optimism and excitement.”

Bankers Fidelity is an insurance provider specializing in life and supplemental health products. Headquartered in Atlanta, GA, Bankers Fidelity has 60 years of experience in the insurance industry and a reputable A- rating from A.M. Best.