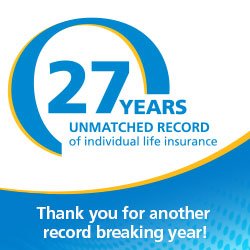 “Ohio National is experiencing an outstanding year in 2016 and has achieved another industry record,” reported Gary T. “Doc” Huffman, chairman, president and chief executive officer. “We have grown our foundational line of life insurance in new annual premium for the 27th consecutive year, and we aren’t done yet with another month to go in 2016.”

“Our industry continues to face challenges, including changing regulations and persistent low interest rates. Despite them, Ohio National has continued to significantly grow our product lines and our distribution capabilities,” Huffman added. “We deliver long-term policyholder value today and for generations to come.”

This year is also the seventh consecutive year that Ohio National has been named among the top workplaces in the Tristate (as ranked in the June 5, 2016, issue of the Cincinnati Enquirer).

About Ohio National: Tracing its corporate origins to 1909, Ohio National markets a variety of insurance and financial products through more than 50,000 representatives in 49 states (all except New York), the District of Columbia, Puerto Rico and through affiliated operations in South America. Additional subsidiaries operate in New York and Connecticut. As of December 31, 2015, its affiliated companies have $40.2 billion total assets under management. Products are issued by The Ohio National Life Insurance Company and Ohio National Life Assurance Corporation.  Ohio National is proud to be named a “Top Workplace” in Cincinnati for seven consecutive years by Enquirer Media (June 2010-2016) and employs more than 1,300 associates. Visit www.ohionational.com for more information.