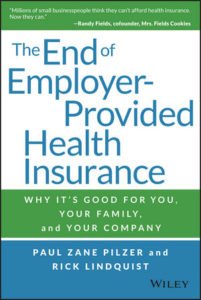 Rick Lindquist and Paul Zane Pilzer, coauthors of The End of Employer-Provided Health Insurance: Why It’s Good for You, Your Family, and Your Company, say there’s a massive shift happening in the way Americans get health insurance. Companies are scrapping the old employer-driven defined benefit model and replacing it with an individual-driven defined contribution model. Consider some recent evidence:

• Largest insurer sees small businesses dumping health insurance. Indianapolis-based WellPoint is seeing its small business customers dump their group health plans and move workers to the Obamacare Health Insurance Marketplace faster than expected. According to 2014 reports, WellPoint has watched 218,000 members, or 12%, of its health plans disappear because small businesses have ended their employer-provided health plans. WellPoint expects this trend to play out over the next two years. “We think [that] will be in a more accelerated timeframe over a shorter window of time, meaning this year and next, than over a longer period of time,” said WellPoint Chief Financial Officer Wayne DeVeydt during a July 30 conference call with investors.

• Leading consultant releases report on shift to business-to-consumer model. Leading consultant PricewaterhouseCoopers Health Research Institute released a new survey of 1,200 businesses that found one-third of employers are now considering shifting their employees onto the Obamacare Health Insurance Marketplace. Some companies, for example, are moving toward a defined contribution model where the companies would give workers a fixed sum of money to put toward an individual policy of their choice sold on the Health Insurance Marketplace. “Early tremors in the market suggest a coming paradigm shift from a business-to-business model toward a business-to-consumer model of purchasing healthcare,” the report said.

• Healthcare architects foresee end of employer-based insurance.Ezekiel Emanuel, one of the architects of the Affordable Care Act (ACA), recently published a book titled Reinventing American Health Care in which he argues that fairly soon “a few big, blue-chip companies will announce their intention to stop providing health insurance.” Once it begins, he argues, other companies will follow, dropping workers by the millions onto the new health exchanges. By 2025, he believes, fewer than 20 percent of Americans will get their coverage from an employer.

In The End of Employer-Provided Health Insurance: Why It’s Good for You, Your Family, and Your Company (Wiley, 2014, ISBN: 978-1-119-01211-5, $25, www.zanebenefits.com, www.healthinsurancerevolution.org/book) — aimed at the owners of small- and medium-sized companies, employees, and trusted business advisors (including insurance professionals) — Lindquist and Pilzer explore what they say are the inevitable forces driving this trend. They also lay out step-by-step exactly what they think each of these groups can do to benefit from this paradigm shift.

Since the ACA passed in 2010, Lindquist and Pilzer argue, it no longer makes financial, legal, or social sense for any U.S. employer to continue providing health insurance to its employees.

“Most Americans don’t yet see the writing on the wall,” says Lindquist, president of Zane Benefits, a U.S. leader in defined contribution employee health benefits. “The insurance industry and larger employers don’t want them to know. The $1.2 trillion employer-provided health insurance industry relies on most Americans under 65 paying two to four times what they should be paying.”

“In the 1970s, many U.S. employers were statistically bankrupt due to the expected cost of their defined benefit pension programs,” says Pilzer. “So, starting in the 1980s, employers switched to affordable ‘defined contribution’ 401(k) retirement programs, which today cover more than 100 million Americans. Today’s health benefits shift is happening due to rising health insurance costs and the 2014 implementation of Obamacare.”

Next page: In the next decade, more than 100 million Americans will…