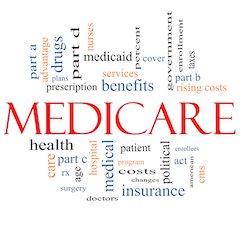 As President of the National Association of Medicare Supplement Advisors, Inc. (NAMSA), one of my obligations is to report weekly via our NAMSA newsletter to our members items of interest relative to Medicare matters, and of course, items of interest to their clients.

Everyone in America is aware that we are living in turbulent times, and those of us in the insurance industry have not been immune to bad news.But, for three weeks in a row recently I have been able to deliver quite a number of entries of good news. Good news for Medicare Supplement and Medicare Advantage companies, for producers, and for the 65+ Medicare-aged public.

Well, there were no less than 19 “good news” items that came out in the month of July. We can’t cover them all, but selecting and reporting some of them can be of value to any producer in the Senior or retired market.

First, and probably the most important to our profession was the report distributed by the Congressional Budget Office on July 8, which indicated Medicare spending (on a per capita basis) is slowing down.Nobody seems to be exactly sure where the per capita savings are coming from, but with the large influx of boomers who started into the system in 2011, and will continue for another 15 years, a reduction of per capita spending means a lot—to Medicare’s budget, to taxpayers, to beneficiaries, and to the Medicare producer.

How and why? Medicare needs all the savings it can get, so with the swell of boomers into the system, a lower (and younger) demographic means that the system is spread out over more enrollees, at a lower per capita cost, which saves Medicare money, and manifests itself in overall Medicare savings—for everybody.

Then, in late July, the mid-year Medicare Trustees Report stated that the Hospital Insurance (HI) Trust Fund would be solvent until 2030, four years longer than predicted last year, and 13 years longer than predicted before the passage of PPACA—Obamacare. The document warns of adifferent story for the Social Security Disability Fund, which is predicted to be insolvent in two years. Remember, that qualifying for the SSDI program also allows people early access to Medicare.

The report states that, “In 2013, Medicare covered 52.3 million people; 43.5 million people aged 65 and older and 8.8 million with disabilities, total expenditures for Medicare were $582.9 billion, and total income (FICA contributions, and Part B premiums) was $575.8 billion.”

In addition, the report insinuates that because expenditures have leveled off (0.8% annually for the past four years),there should not be a need for an increase in the Part B premiums for enrollees. This premium is currently at $104.90 per month (for most enrollees—higher income earners pay more), and the stabilization created over the past three years in Part B premiums, which led to the current rate, and presumably would follow into the 2015 rate, would be great news for Part B enrollees.

“Admitted” vs. “Under Observation” problem

Then, three weeks ago, a nearly two-hour hearing was held in a Senate committee aptly named the “Improving Access to Medicare Coverage Act of 2013.” Though the title is somewhat dated (it was introduced in March 2013), the bills, identical in the Senate and the House, if passed, will have a HUGE impact on Medicare enrollees.

The background of the problem—and one which NAMSA has fought for nearly three years—is that many people are not allowed access to the Extended Care benefits of skilled care in a nursing home because they were not “admitted” to the hospital. Currently, access to Extended Care requires that a patient be admitted to a hospital for three days (not counting the day of dismissal) to qualify for their skilled care needs,and find out too late that they were in the hospital under “observation.”

The “admitted” vs. “observational” status of a patient has been a particularly sore spot for Medicare enrollees (and their children) for the past three years, and is growing more frequent. When a patient goes to the hospital, in pain, or sickness, or from an accident, they are given a wristband, moved to the fifth floor, and hope to have their malady cured. The last thing on their mind is to ask if they have been admitted. They assume they have been. But then upon dismissal, they get the bad news that they need to be transferred to skilled care, and that Medicare will not be paying for it.

Doesn’t sound like a big deal? Well, it is. This unfortunate predicament happened to 1.4 million enrollees in 2011, and grew to 1.9 million in 2012. And…it is still growing. There are myriad reasons why this happens but it really boils down to one problem. Medicare pays more to hospitals for “admitting” patients (as an inpatient, which then becomes a Part A claim), than it does for coding them as “under observation” (as an outpatient, which then becomes a Part B claim).

This causes hospitals to be paranoid in their coding procedures because if they are accused of “upcoding” to admission, the Recovery Audit Contractors (RACs) of Medicare come along behind them and expect the hospitals to refund the money Medicare paid. Thus, the problem of coding as “observational” also winds up on the backs of the Medicare patient—through the loss of the Extended Care benefits.

So, that’s what the two bills and the hearing were all about—putting a stop to this problem, doing away with the “observational” problem, and perhaps, even doing away with the three-day rule. While most congressional hearings are somewhat boring, this one was lively. Five very skilled people testified in favor of passing the bills, and their arguments were well received. Nobody on the committee or providing testimony said a word in opposition to moving this forward. In fact, I can’t imagine a Senator or Representative voting against these bills and going back and facing their Medicare constituency as to why they did not support this legislation.

That’s the good news. But, now, when Congress actually passes the bills becomes the question. One thing is certain—enough legitimate concern has been raised that the problem needs to be settled, and quickly, before another two or three million people get the bad news.

First on the Alzheimer’s front. The Framingham Study, a federally funded initiative tracking several thousand people over multiple five-year periods, indicates that “Among people 60 and older, new cases of Alzheimer’s were 44% lower in the 2006 to 2011 time period than they were between 1978 and 1982.” McKnight’s Long Term Care News headlined, “Chance of a senior developing Alzheimer’s has dropped 44% over the last three decades, a large U.S. study shows.”

“The odds of developing Alzheimer’s disease fell sharply among seniors in the United States over the last 30 years… The finding casts a new light on prior estimates that the number of people needing long-term care will triple by 2050, largely due to Alzheimer’s.”

Also, on the Alzheimer’s scene, according to a MedGaget article, “Although there aren’t any reliable treatments for Alzheimer’s disease, being able to diagnose it years before the onset of symptoms would allow the development of near early-term therapies that are currently impossible to even try out.A new device for imaging the eye developed at Cedars-Sinai Medical Center has now been used to effectively screen patients for Alzheimer’s with impressive accuracy.”

Then, there’s good news on the stroke front. The July 16 issue of the Journal of the American Medical Associationpublished a study by Johns Hopkins Bloomberg School of Public Health, which indicates that, “Seniors in America are suffering fewer strokes, regardless of their race or sex. We find that stroke incidence (among those 65 and older) has been declining for the last 20 years.”

“The use of cholesterol-lowering medications increased from just under 4% to nearly 13% over time in these patients, and an accompanying decline in ‘bad’ LDL cholesterol levels. At the same time, use of blood pressure medications increased from about 29% to 43% in that same period, an increase seen predominantly among people older than 65.The number of current smokers also declinedduring the course of the study.”

Medpage Today cited that “Stroke is the leading cause of physical and cognitive long-term disability in the U.S., with more than600,000 first strokes and 800,000 strokes occurring annually.”

But, the good news continues. Heart attack rates among the elderly have been a problem forever. Now, a new Yale University study says that “Seniors of Medicare age experienced a better than 20% decline in heart attacks.”

At the same time, HealthDay reports some bad news relative to patients aged 30 to 54—indicating that this cohort has not improved heart attack numbers, and particularly points out that heart attacks in womenseem to be becoming more prevalent.

“Obesity and diabetes among young adultsappear to beoverwhelming the improvements in treating high blood pressure and high cholesterol that have helped older Americans reduce their heart attack risk.”

So, sort of a “good news, bad news” situation overall, but a20% decline in heart attacks for Medicare aged people has to be good news for our clients, our companies, and Medicare.

You aren’t going to believe this,but according to the U.S. Census Bureau, and in an article from McKnight’s Nursing Home News, “The number of American nursing home residents 65 and older decreased by 20% within 10 years, the Census Bureau reported. From 2000 to 2010, the number fell from 1.6 million to 1.3 million.”

There are probably several reasons for this, including the high cost of nursing homes that provide custodial care and the desire of more people to remain at home, in the community, or in the homes of adult children, as well as a corresponding rise in the number of people who prefer Assisted Living facilities. The current numbers for those receiving care in their home, or in someone else’s home, are pegged at about 10 million, which in turn, affects about 50 million people involved in the home care process.

In a day and age when the 65-and-over population is rapidly growing, fewer people residing in nursing homes is very surprising, and seems to indicate that this demographic is requiring fewer cases of custodial care. Maybe. Maybe not. But the Census Bureau citation seems to indicate some trending that providing for long term care needs in America may be changing.

There are more items,including the fact that 136,000 Registered Nursesare delaying retirement, many of them becoming Physician Assistants and Nurse Practitioners, which will help a predicted shortfall of primary care doctors over the next decade. That has to be good news for Medicare recipients, some of whom have been having difficulty in finding a primary care doctor who accepts Medicare patients, once they go on Medicare.

So, these are the basic “good news” features we have been surprised with this summer. In a world full of “bad news,” and in a world that insurance producers have come to accept as “not so good news,”we have been treated to a series of events, studies, and projections that indicate things have improved for our elderly clients. Godspeed to that demographic. They are us, our parents, our clients, and our constituents.

If you are interested in obtaining up-to-date information via The NAMSA Newsletter each week, please go to our website, www.NAMSA.US and find out how to become a member of your professional trade association. We welcome enquiries, and you may call our office toll-free at (888) 333-1844 for further information.

Ron Iverson is the president of the National Association of Medicare Supplement Advisors, Inc.