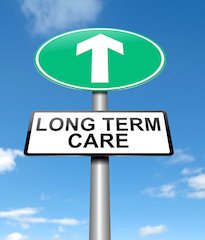 Nearly half of individuals 70 or older who apply for long-term care insurance are declined coverage due to existing health conditions according to a just-released study conducted by the American Association for Long-Term Care Insurance (AALTCI).

“Individuals mistakenly believe they can obtain long-term care insurance protection at any age,” said Jesse Slome, director of AALTCI. “It is especially harder to health-qualify at older ages because our health changes and it rarely gets better as we age.”

The Association just released results of a study of leading long-term care insurance companies. According to the findings, 44% percent of individuals age 70-79 who applied for coverage were declined, which is an identical rate to the same study in 2014.

“That means they took the time to work with an insurance agent who completed and submitted an application,” Slome said. At younger ages the percentage of individuals declined for traditional long-term care insurance policies is lower but still significant – and increasing, according to the AALTCI data.

“This year’s study found the percentage of declined applicants increased compared to the similar study conducted a few years ago,” Slome said. “The decline rate for individuals between ages 50 and 59 was 22% in 2017 compared to our 2014 buyer study when the decline rate was 17%.” 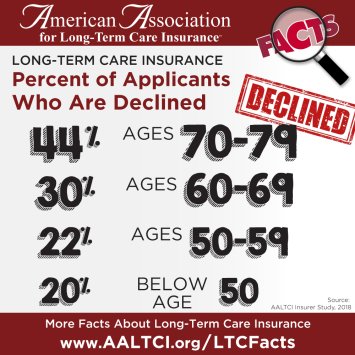 “So many Americans take medications which mislead us to think we are in good health when we really are in good controlled health,” Slome said.

He says consumers should start thinking about long-term care planning in their 50s, when costs are lower and, more important, applicants are far more likely to meet the required health qualifications.

“Once your application is accepted your coverage can not be cancelled even when your health changes, and it will change,” Slome said.