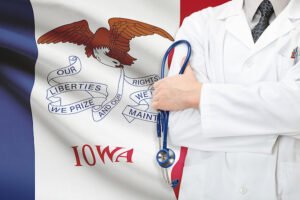 Iowa ranks as this year’s best state for healthcare in the U.S. while South Carolina brings up the rear, according to MoneyRates.com, which just updated its award-winning research on healthcare quality among U.S. states.

The Hawkeye state bumped Massachusetts from its top overall position in last year’s report. On the opposite end of the spectrum, South Carolina ranked in last place for the second consecutive year based on an average ranking for all 50 states and the District of Columbia across eight different criteria:

The latest study confirms that where you live can impact access, cost and effectiveness of healthcare services.

The complete report, Vital Signs: Best States for Healthcare 2021, includes an interactive map allowing consumers to easily compare healthcare conditions among up to three states at a time.

Healthcare disparity between states is illustrated in the following examples:

“As COVID cases strain health systems nationally, it becomes increasingly important to understand which states are most likely to deliver highest quality care,” said Richard Barrington, senior financial analyst for MoneyRates. “Healthcare is one factor considered by those determining the best states to retire, and also for people thinking about the best states to raise a family.”

Iowa achieves top-10 ranking in four of eight categories this year, with first-place position in health insurance coverage and child immunization. The top 10 states for healthcare delivery overall are:

States ranking in the bottom 10 are listed from worst to tenth-worst:

“It’s clear that where people live can significantly affect the healthcare they receive,” Barrington said. “With health systems taxed as never before, this can be crucial information to consider.”