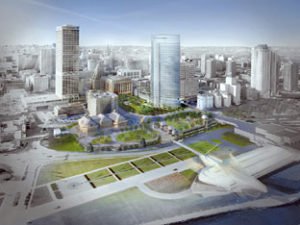 Fellow mutual giant New York Life is expected to release its 2017 dividend payout before the end of November. New York Life paid out a record $1.7 billion to its policyholders in 2016.

The prolonged low interest rate environment gets the blame for 2017’s decrease in dividend payouts, according to releases from both NWM and MassMutual.

In September, Northwestern Mutual said it will eliminate hundreds of jobs in metro Milwaukee (image above is of the under-construction Northwestern Mutual Tower and Commons in downtown Milwaukee) to cut costs amid prolonged low rates. Low interest rates, of course, make it more difficult for insurers to grow earnings because insurance companies invest premiums from policy owners mostly in relatively safe investments tied to rates.

“To be prudent investors and to be there for the long run, our investment portfolio consists of 83% investment grade corporate fixed income investments,” said Dave Remstad, Northwestern Mutual’s chief actuary, in a statement announcing the 2017 dividend.

Although the company also invests in real estate and the stock market to add diversity and achieve an overall higher return, low interest on fixed-income investments over the past six or seven years have held down earnings.

Still, the $5.2 billion is one of the highest payouts in the company’s almost 160-year history, representing an excellent value in the current economic environment of prolonged low interest rates.

“Our policyowners can feel very good that their company pays more dividends than any other company in the industry,” said Chairman and CEO John Schlifske. “No other company even approaches the amount Northwestern Mutual pays in dividends – and our 2017 payout will be no exception.”

About 85% of the dividend – or around $4.4 billion – will be paid to traditional permanent life insurance. Northwestern Mutual also expects to pay record dividends on several other product lines. This includes:

In 2017, the company’s dividend scale interest rate on unborrowed funds for most traditional permanent life insurance will be 5.00%.

The majority (about two-thirds) of Northwestern Mutual’s traditional permanent life insurance dividend payout is the result of favorable mortality and expenses. Interest from investment earnings make up about one-third of the payout.

Northwestern Mutual said in its release it is able to pay “industry-leading dividends because of its strong operating fundamentals, including years of high policy retention among clients, low expenses, favorable claims experience and sound long-term investing.”

MassMutual says 2017 payout among biggest ever

This is the first time in four years that MassMutual has decreased its total dividend payment from the prior year.

“As a mutual company operating for the benefit of our participating policyowners and members, the people we protect are our top priority, and we are honored to once again share our success with them through our annual dividend payout,” said Roger Crandall, MassMutual Chairman, President and CEO. “[The] announcement is a testament to our strength and stability amid global headwinds, including a prolonged, unprecedented low interest rate environment. We are extremely proud of our ability to sustain a highly competitive dividend while providing accessible financial solutions and sound guidance to help generations of families secure their future and protect the ones they love.”

During a similar period from 2006 to 2015, MassMutual also paid more than $32 billion in insurance and annuity benefits, achieved 10 straight years of record weighted whole life insurance sales, and nearly doubled its total adjusted capital to historic levels of more than $17 billion (as of 9/30/16), while making multiple significant strategic acquisitions.

Notably, earlier this year, MassMutual completed the acquisition of the MetLife Premier Client Group, substantially increasing the size of its distribution network to more than 9,300 advisors.

“With a highly competitive dividend, a recently expanded and strengthened advisor force, and a host of innovative tools and solutions that help people in every phase of life, we are primed to reach millions more people who need the holistic financial solutions we provide,” said Mike Fanning, Executive Vice President and head of MassMutual U.S. “All of this enables us to be strong stewards of the company and provide financial well-being for our customers – deeply understanding their needs, simplifying their lives, and helping them build a more confident future.”