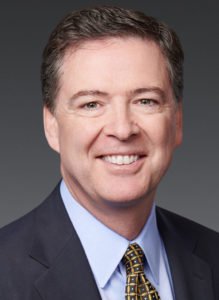 LIMRA announced Monday that former Federal Bureau of Investigation (FBI) director James B. Comey will deliver the keynote speech at the 2018 LIMRA Annual Conference, which will be held Oct. 28-30, 2018, in New York City.

Comey has been highly visible in the past week with an all-out media blitz following the release of his controversial new book, “A Higher Loyalty: Truth, Lies and Leadership.” In it, Comey details many never-before-told experiences from his time as FBI Director, and in particular his tumultuous four months under the Trump Administration before the President fired him in May 2017.

“Throughout his decorated career, James Comey has exhibited attributes that would make his knowledge useful on any platform,” said Robert A. Kerzner, president and CEO, LIMRA, LOMA and LL Global. “His leadership qualities, in particular, have been recognized by some of the highest level officials in the United States. We are thrilled to have him as our keynote speaker.”

Appointed by President Barack Obama, Comey led the FBI from 2013 to 2017. During his tenure, he oversaw the federal response to several mass shootings, including at the Pulse nightclub in Orlando, which was the deadliest shooting in American history. He is also known for his work on border control. Comey became a household name during the 2016 presidential campaign due to his heavily scrutinized handling of the FBI’s investigation into Hillary Clinton’s private email server, and after Trump was elected, for his handling of the FBI’s investigation into the Trump campaign’s interactions with Russian actors during the campaign.

A native of New York, Comey previously was a federal prosecutor in both his home state and Virginia. He also served as the U.S. deputy attorney general for the George W. Bush administration.

The LIMRA Annual Conference is one of the largest gatherings of senior executives representing diverse sectors of the financial services industry. Members and partners come together to share strategic industry insights and participate in high-level networking. The Annual Conference agenda is designed to offer attendees insights into the latest industry trends.

LIMRA’s premier conference will be exceptionally special as it will be the final one for CEO Robert Kerzner, who will retire at the end of 2018 after 14 years with the company.

“The LIMRA Annual Conference has always been special to me,” said Kerzner. “It has never failed to provide an exclusive opportunity for members of the financial services industry to come together and share insights on our business and hear from nationally recognized authorities.”