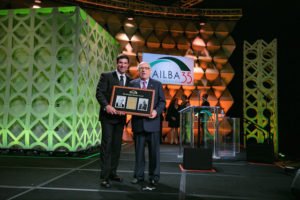 The annual award, NAILBA’s most coveted and prestigious accolade, honors distinction in brokerage and is bestowed upon the individual most committed to furthering independent life brokerage as a distribution system, and who demonstrates an exemplary record of community service.

In presenting the award, David Long, NAILBA Immediate Past Chairman, noted that Holden, who started in the insurance business in 1964, is considered by many to have had a hand in building the independent brokerage distribution system that the vast majority of BGAs use today.

Ten years into his career, he and a partner formed CPS, a company he and his sons lead today and one of the largest brokerage agencies in the U.S., with 26 affiliates around the country.

Holden was raised in Kenya, and educated in Switzerland. After emigrating to the U.S. and becoming a citizen, he demonstrated active citizenship by volunteering and supporting his local community as well as his professional industry. He has served as a little league coach, and was instrumental in bringing the first soccer team to his local high school. He also supports several community arts programs, and has made significant contributions to his area’s local hospital.

He served as NAILBA’s Chairman in 1994, and was the original founder of the NAILBA Golf Tournament. The championship trophy is named after him. He has also served as the President of Orange County Life Underwriters, the president of California Life Underwriters and on the Board of Directors for Life Happens back when it was the Life Foundation. He has contributed to several major insurance publications, and serves on BGA advisory councils for numerous carriers.

His family will tell you that his most significant commitment was always to them. He was a loving husband to his wife of 52 years until her passing in 2013. Their two sons joined him as leaders in the brokerage community, and he is a doting grandfather to Emily, Max and Charlie.

NAILBA 35, the organization’s 2016 annual meeting, was hailed a success by NAILBA leadership and meeting participants.

Held Nov. 17-19 at the Gaylord Texan resort in Dallas, the event attracted 1,138 attendees and 107 exhibiting companies in 122 booths. This meeting, recognized as “Where the Brokerage Industry Meets,” is the independent insurance brokerage industry’s premier event. With a recently reworked schedule, the program featured two general sessions, 16 workshops in 21 timeslots, and many opportunities for networking.

“I am exceptionally proud of the success of this year’s meeting. We made changes to the schedule and the content based on attendee feedback, and the response was outstanding,” said NAILBA Chairman George C. (Chip) Van Dusen IV. He continued, “Our exhibitors and sponsors demonstrated their serious commitment to our distribution channel, the location and venue were an excellent setting for our Annual Meeting, and of course our Professional Development Committee did an outstanding job developing the education program.”

This year’s Opening General Session included the Chairman’s Address from Van Dusen, a State of the Foundation update and grantee and donor recognition by Mike Smith, 2015-2016 President of the NAILBA Charitable Foundation, and closed with a keynote by Erik Wahl. The Opening General Session also featured information about upcoming new member benefits and strategic planning efforts. The Chairman’s Award, recognizing outstanding volunteer service by a member of the brokerage community, was presented to Ken Leibow of Impact Technologies.

NAILBA 35 workshops covered a wide range of topics of interest to the brokerage community such as the DOL fiduciary standard ruling, IRA tax law, recruiting and marketing to producers, leadership, succession planning, the DOL overtime rule, the RAF underwriting forecast, and more. NAILBA’s Agency Successor Networking Group, a group designed to offer mentoring for members moving into the role of principal, offered a specialized workshop for the group’s participants.

The schedule was updated this year to incorporate more opportunities for education, and to reunite the Mooers Award festivities with the NAILBA Charitable Foundation’s Auction activities. In addition, the schedule offered outstanding opportunities for networking and featured a robust mobile app which provided multiple opportunities for attendees to connect and get the most up-to-date meeting information.

Sorebo, NAILBA’s current Chair-Elect and the 2017 NAILBA Chairman, concluded, “We have already contracted more than 2/3 of the NAILBA 35 exhibitors for NAILBA 36 and anticipate that we will have another sold out Exhibit Hall at the Diplomat Resort and Spa in Florida. Our entire Board of Directors, our members, and our valued corporate supporters are looking forward to another outstanding event next year at NAILBA 36.”

NAILBA 36 returns the Annual Meeting to the Diplomat Resort and Spa, November 16-18, 2017 in Hollywood, Florida. For more information, visit www.nailba.org/nailba36.

About NAILBA: The National Association of Independent Life Brokerage Agencies (NAILBA) is the premiere insurance industry organization promoting financial security and consumer choice through the use of independent brokerage distribution. NAILBA serves as the national association of life, health and annuity insurance distributors. For more information visit www.nailba.org.