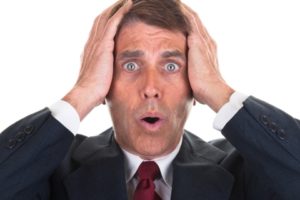 Forum member (screen name) Cornelius did the community a favor by starting “The Official Fess Up Thread” earlier this week, which has already led to several outrageous and hilarious stories from the field.

Common themes? Car accidents, running out of gas and farm animals. Enjoy these snippets (in no particular order) from the live thread, and then go to the thread to check out more and post your own stories!

7. Throughout the day driving around knowing I needed to gas up, I put it off. Had a late appointment and figured to get gas on the way to appointment. Well, put that off too until after the appointment. Left client, got about half-mile away, no gas in tank. I forgot my wallet at home. Hoofed it back to client’s house to use phone to get buddy out of bed. Client offered to assist me but I said no thanks.

My buddy shows up, cussed me out and I drive home. When I went back to client’s house the next time, they gave it to asking if I had gas or needed gas. The wife asked for my ID to make sure I had my wallet.

6. I’d been in the business about a year. I had an 11 p.m. appointment with a farmer (after he got out of the field). Made the sale and left…it was going on 1 a.m. I got about a mile down the road and ran out of gas. I was an hour from home. This was back in 1974, so no cell phones. I walked back to his house in the dark in rural Nebraska. Lots of farmers have their own gas pump. He gave me enough gas to get home. I’ve kept a close eye on my gas gauge ever since.

5. Ten or eleven years ago I was on my way to an appointment when another driver blew a stop sign and hit me. His truck had some molding around the wheel well come off. My truck was totaled. After my truck was towed, the cop said, “Get in, I’ll drive you home.”

“But I have an appointment down the street.”

Cop offered to drive me there.

“Sorry about all the stuff on the front seat, you’ll have to ride in back,” he says.

You know, cage, doors don’t open from the inside. When we pulled into the driveway, the guy inside parts the curtains, says “Look, honey. There’s a police car in the driveway.”

Then the cop comes around and let’s me out – it’s the insurance man.

After I apologized for being late and told them about the accident, the couple sat with me, they bought two policies (must have thought if the insurance man can have an accident, what if it’s me?) and then he drove me home.

Next day, I called GA to say I’d be late, had an accident on the way to the appointment. When I arrived at the office, Dave was worried about me. “Are you sure your okay?” I said yes.

That’s when I gave him the two apps and check.

They had me tell that story at the home office school a month or two later.

4. I was brand new to insurance when I got in a pretty bad accident. I wasn’t injured in the slightest, but my car was U-shaped. I was pretty shaken up by it. By the time I was finished talking with the police & getting my car towed, I was already over an hour late for my appointment. So I called the prospect from a pay phone & rescheduled. Then I called my manager to tell him I’d been in an accident. He didn’t ask me how I was doing, just “what about your appointment?” When I responded that we had rescheduled, he blew up at me, saying I should have given the appointment to another agent! Then he asked if I was ok. I wanted to say, “I was before I talked to you!” It’s easy to understand why he didn’t last long as a manager.

3. I was talking to a farmer in his yard and he had a couple of geese. He said to be careful because one of them took a plug out of his wife’s leg. I kept my briefcase (haven’t used one of those in 20 years) in between me and the geese. The geese would lower their head close to the ground and move their butts side to side like a cat does when they get ready to spring…then they’d attack his dog. The dog finally got tired of it and placed their neck in his mouth and shook them around a bit, then they’d leave him alone for a while. Funny to watch!

2. As a brand new agent, I was helping my dad out. He went on a trip and asked me to deliver a policy to one of his clients, if it came in while he was gone. Of course it arrived the next day, so I scheduled the appointment and set out to deliver the policy.

I grabbed all of the paperwork, put it in neat folders and set it on the console between the front and back of my car. I should preface this with: I drive like Danica Patrick – only I’d win on a regular basis. So of course, I take a sharp turn and the policy slides in between the seats – only I didn’t realize it since the folder was still mainly intact.

I get to the client’s house, super nervous, grab the folder, sit down in the kitchen, open the folder and the policy is gone! I thought that I may have left it in the office, which wasn’t too far away, so I excuse myself to drive back to the office to grab it. I am halfway to the office when I look behind me, what do I see in the backseat? The policy! So, I turn around and try it all over again.

I am so grateful that it was one of my dad’s longtime clients and he had a chuckle out of it. I felt like I was going to puke…

1. The second sale I ever made I was so excited because the first one was to a personal friend. Well, after the sale, I forgot to log the guy outta my system so he could not see what I was doing on my computer. Well… I instantly turned around and emailed my trainer bragging about how easy I just made my first real sale, this and that. The whole time he could see my screen! Needless to say, it ended up as a chargeback.

Want to read more, or have an interesting story of your own to share? Visit the thread now!