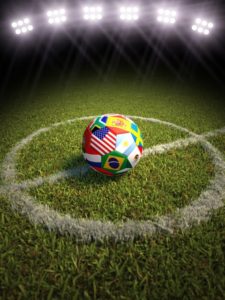 The World Cup soccer tournament – the biggest sporting event in the world – kicks off next week in Brazil, just a few months after the 2014 Winter Olympics in Sochi, Russia, where headlines were occupied with a grave tone for potential “Black Widow” terror events. The question is: will spectators, corporate sponsors and the media yet again find themselves in an unsettling environment when on site at the next global stage?

Furthermore, have insurance advisors learned from Sochi where to turn to keep their clients safe, provide them with a proper local education, and in the instance a threatening event does occur, the instructions on what to do, where to go, and how to behave?

Brazil and the World Cup will certainly be a test, and many of the newer types of protection in place may provide a blueprint for future high-risk travel by corporate executives and VIPs.

President Dilma Rousseff of Brazil promises, “We will guarantee the security of fans, tourists, teams and the chiefs-of-state that will visit us. I am certain we will host the Cup of Cups.” On the other hand, Brazil’s most dangerous drug cartel has promised a “World Cup of Terror,” vowing that the mass violence that has ignited in the Brazilian streets of late will not subside when visitors from all over the world flock to Brazil for the World Cup.

So why the ominous mixed-message and what does it mean to the 600,000 people traveling to Brazil to watch 32 countries battle it out in stadiums across the country? To answer that question it’s important to first understand the host country. There is no denying that Brazil has a crime problem. Robberies and “quicknappings” outside of banks and ATMs occur regularly. In a “quicknapping,” criminals abduct victims in order to receive a quick payoff from the family, business, or the victim’s ATM card. The victims then go free. Most of the time.

According to USA TODAY, Brazil has the seventh-highest homicide rate in the world and only 8% of reported crimes are solved. Brazil’s murder rate has more than doubled over the past three decades, according to latest research. Prepared by the non-profit Center for Latin American Studies in Rio, the 2013 Map of Violence report found the murder rate in Brazil was 27.4 per 100,000 inhabitants in 2011, or 134% higher than the 11.7 per 100,000 in 1980.

Brazilian officials have not turned a blind-eye to the potential problems that may arise during the World Cup. An increased security presence will be visible in all of the cities hosting matches. Since 2010 the “Police Pacification Units” have been carrying out operations in Rio to clear drug gangs and reduce inter-gang violence. “And if necessary we will also mobilize the armed forces,” President Rousseff has said.

This is hardly what the Brazil tourism bureau wants to put in its brochure, but it’s also not enough to stop more than half a million foreigners from descending on Brazil, including rabid fans, corporate sponsors and executives, the media horde, and perhaps some couple from Iowa that just loves soccer played at its highest level.

While the typical soccer fan or tourist may be wary of the dangers of traveling a place as volatile as Brazil, many executives wear blinders of a whole different type. Corporate executives and entrepreneurs are experienced risk-takers who aren’t easily bothered by anything negative and are less than eager to be viewed as vulnerable.

Incredibly optimistic, they tend to see themselves as invincible. It’s not that they throw caution to the wind, but that they believe themselves to be exempt from harm and they’re not about to let anything, even the possibility of a kidnapping keep them from attending the World Cup, particularly if they have a monetary stake in the games (such as corporate sponsorship). But their sense of invulnerability just makes them more vulnerable, particularly in a country where kidnapping, murder and mayhem are commonplace. Insurance is definitely needed, or at the very least should be a strong consideration, for anyone traveling to the World Cup, and even more so for the HNW crowd.

The heightened awareness around a dangerous trip often results in an insurance need being developed or uncovered. When this need arises, the underwriting process migrates from the traditional insurance market to the playing field of specialized risk underwriters. Few domestic carriers possess the ability to underwrite large risks when there’s high-risk exposure to the world’s hot zones. To get the job done, insurance advisors must work with large international insurers that are willing to deploy meaningful capacity. The easiest way for advisor’s to access these markets is through an experienced US-based Lloyd’s of London correspondent skilled at designing and underwriting coverage in these volatile locations.

The best insurance advisors are masters at uncovering details from their clients, documenting them and communicating them effectively to underwriters. A well-written cover memo will often be the basis for offering coverage and can be the primary source for pricing consideration when it includes itinerary, security and travel arrangements.

When underwriting coverage in highly hostile areas, rates can vary based on multiple factors, such as security arrangements, travel vendors, length of stay and, in highly hostile areas, rates even vary down to specific latitude and longitude coordinates, often within a single city or locale. This coverage can encompass everything from accidental death, disability and dismemberment to kidnap & ransom, evacuation, return of remains, extraction, travel medical, emergency assistance, etc.

In the past such coverage often dictated taking out three, four, sometimes five different policies to properly protect the high-net-worth traveler, a daunting task both for the insurance advisor and the client, and it was often not very cost-effective. What specialty underwriters have now done, coming on the heels of Sochi and Russia’s Black Widow terrorist threat, is taken that increased need of all-encompassing traveler insurance and created an all-inclusive product encapsulating all segments of coverage into a single policy. By combining numerous forms of insurance under one aggregated policy form and marrying that with security consulting, insurance advisors have a more streamlined way of acquiring protection for appropriate clients. Coverage with this new product protects the insured immediately upon leaving American soil, but its value begins long before then. As a risk mitigation tool, underwriters are now providing their policyholders with a pre-trip World Cup security briefing that highlights various threats in the region and offers counsel on how to best mitigate those threats. International cell phone numbers are gathered and urgent security push notifications can be sent via text to policyholders if an outbreak of violence erupts in a given part of Brazil.

Policies typically range from $1 million to $5 million, but for extremely wealthy travelers, limits up to $100 million-plus can be deployed. In the specialty insurance world, sad to say, all men are not created equal. High profile VIPs such as David Beckham will have to pay a lot more for coverage than our two friends from Iowa.

The kidnap and ransom component of these policies cover expenses for the services of experienced crisis management teams, which include highly skilled professionals such as former CIA, FBI and NSA agents and ex-Military Police personnel. Their purpose is to assist in the negotiation of the safe release of kidnap victims. If a ransom is required, they are skilled at negotiating the payout, with safety as the top priority. Anyone buying these policies should keep the insurance purchase strictly confidential as potential kidnappers may view such insurance as a source of ransom funds.

The possibility of a kidnapping is one of the bigger challenges faced by a growing number of US travelers, particularly when traveling to an event like the World Cup, where all the components are in place to create a volatile situation. And if the current pattern persists, we can expect that there will be more kidnap victims and payouts in the years ahead, even though many of these incidents (by design) never make the news.

None of these dire warnings will stop the massive influx of people expected in Brazil this summer. “Violence is a part of daily life in Brazil and to assume that this will go away because people feel good about the World Cup is as irresponsible as it is naive,” said Christopher Gaffney, a visiting geography professor at the Fluminense Federal University in Rio de Janeiro. Others, however, dismiss such views. The World Cup’s ambassador, soccer legend Pele, insists the tournament will bring rewards for Brazil, “As long as people don’t ruin the party mood.”

But at least now HNW travelers heading to Brazil can get the coverage they need with a minimum of red-tape and the need to squirrel away a half-dozen different policies based on the level of coverage. The capability to now have all-inclusive umbrella coverage will be one less concern for travelers, but should in no way diminish their awareness of what’s been happening on the mean streets of Brazil for the past three decades.

But should that party mood go south, the smart traveler will want to be protected, which is, of course, the ultimate… G-O-O-O-A-A-L-L-L!!!