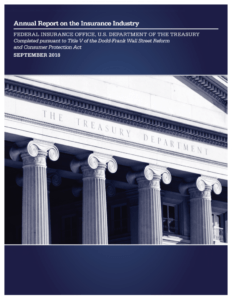 The United States remained the world’s largest single-country insurance market in 2017, with a 28% market share of global direct premiums written, according to the recently released 2018 report on the insurance industry from the Federal Insurance Office (FIO).

China leapfrogged Japan to claim the second spot on the list, followed by the U.K., France, Germany, South Korea, Italy, Canada and Taiwan, rounding out the top 10 insurance markets in the world.

The FIO annual report, as mandated by the 2010 Dodd-Frank Act, provides a detailed description of the U.S. insurance market (life & health and P&C), including a variety of industry statistics and the national and international regulatory environment.

What follows is additional market info from the 107-page FIO report, which includes footnotes detailing sources of information and statistics. To view a PDF of the complete FIO report, click here.

Premiums shown for MetLife, for example, include premiums written by all of its insurance subsidiaries in the U.S., but exclude business written by affiliated entities in other jurisdictions. Similarly, Jackson National Life Group is foreign-owned, and the results shown only include U.S. operations.

In 2017, annuity premiums and deposits represented 48% of total net premiums written, a decrease from the 53% reported in 2016. Sales of traditional life insurance products rose to make up 23% of 2017 L&H sector net premiums written from 19% in 2016, while the remainder was virtually comprised entirely of A&H sector premiums.

A few more nuggets from the report:

In recent years, Treasury and FIO have commented on the growing social need for long-term care and the steady decline of the private LTCI market. As of year-end 2017, an estimated 4.6 million individual LTCI coverages were in force, with LTCI policies paying $9.2 billion in claims to 295,000 individuals during the year.

Despite these contributions, market contraction continued in 2017, as individual sales of standalone LTCI policies totaled $176 million, 23% lower than in 2016, and the estimated number of Americans purchasing new policies (67,000) dropped 27% from the prior year. The number of insurers offering LTCI remained at an historical low (about a dozen compared to more than 100 in the early 2000s).

The financial performance of in-force LTCI policies also remains a concern for the industry, investors, and regulators. In the fourth quarter of 2017, one insurer incurred a $9.5 billion pre-tax charge arising mainly from deteriorating results in a block of approximately 310,000 LTCI policies in runoff since 2006. During 2018, an insurer disclosed that it expects to incur an LTCI-related charge that “is likely not to exceed $750 million after tax,” while another reported a second quarter $1.5 billion pre-tax loss arising from revised actuarial assumptions for its LTCI legacy business.

In an ongoing effort to improve their operating results, companies with LTCI exposure continue to aggressively seek state regulatory approval of premium rate increases on existing policies. For example, in the first quarter of 2018, 10 leading LTCI carriers filed for approval of rate increases totaling $97 million (compared to $49 million in the first quarter of 2017) and affecting nearly 135,000 policyholders (compared to 87 million).

The above, from page 59 of the report PDF, is followed by additional detail about the LTCI market.

The report concludes with an outlook for the domestic insurance market. Here is an excerpt:

Based on financial results reported by insurers through the first half of 2018, the outlook for the U.S. insurance industry appears to be a continuation of the healthy trends observed in 2017. The effects of ongoing monetary tightening and recent expansionary fiscal measures, however, may be more marked in 2018. Since 2015, the Federal Reserve has raised the fed funds rate on seven separate occasions, each by 25 basis points, with the most recent increase in June 2018. The fed funds rate currently stands at 2.0 percent, which is also the Federal Reserve’s target inflation rate. However, the interest rate hikes have yet to manifest themselves fully in the financial results of insurers. After a persistent decline in annual yields on invested assets since 2007, the L&H sector reported a slight uptick by two basis points in 2017 and a four basis point increase for the first six months of 2018 relative to the comparable period a year ago.

For the P&C sector, yields rose by more than 18 basis points during the first half of 2018 compared to the same period in 2017, suggesting an improvement may be in store for 2018 after the sector reported two consecutive years of flat yields.

Though U.S. employment has grown past full employment levels, with an unemployment rate of 3.9 percent as of August 31, 2018, and wages have exhibited some upward movement, there is little likelihood of a sudden spike in interest rates to negatively affect life insurers through increased surrenders by policyholders and unrealized losses in investment portfolios. Both insurance sectors will likely experience increased relief to their profit margins in 2018, as interest rates are expected to rise at a moderate pace. In time, the reversal of a low interest rate environment will be beneficial for insurers. In addition to improved earnings, gradually rising interest rates will ease spread compression in spread-dependent businesses and enable insurers to more closely match their asset and liability cash flows to meet liquidity demands.

Read the complete conclusion on pages 104-107 of the FIO report.