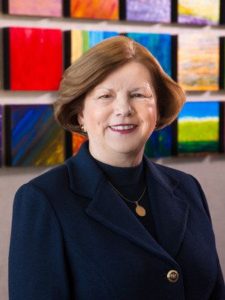 Martin, pictured at left, will continue to serve as a director and vice chair of the boards of AMHC, AHC and ALIC.

“The opportunity to lead is a privilege,” Martin said. “I thank everyone at Ameritas for their commitment to the organization.”

Martin was elected Ameritas chief executive officer in 2009. She joined Ameritas, then called Bankers Life Nebraska, in 1984 as an audit division manager. Martin rose through the company, serving the next 35 years in various key leadership roles. As CEO, Martin set the pace and was essential to the growth of Ameritas.

Ameritas assets grew 61%, and the total number of customers grew 75% under Martin’s leadership. By almost all measures, the company is at least 50% larger than it was when she became CEO.

“This is exciting,” Martin said. “It’s gratifying to look back and see how much we have grown and the impact we’re having on our customers’ well-being.”

In 2012, Martin led the effort to rebrand Ameritas, modernize the Ameritas bison image and add “fulfilling life” to the logo to reflect the company’s purpose-driven philosophy. Martin also was instrumental during the mergers with Acacia Life Insurance Company and The Union Central Life Insurance Company.

Martin’s term as chair of the American Council of Life Insurers ended earlier this month. She was only the second woman to lead ACLI in its 113-year history. As chair, Martin worked to raise awareness of the important role the life insurance industry plays in protecting consumers’ economic well being and in driving the economy.

Martin also recently completed her term as board chair of the University of Nebraska Foundation and serves on the Lincoln Vision and Prosper Lincoln steering committees. She is a National Research Corp. board member and serves on the MDRT Foundation honorary board of trustees.

Lincoln Rotary Club 14 this month named Martin as the 2019 Nebraskan of the Year. The Lincoln Chamber of Commerce recently selected her for its Burnham Yates Citizenship Award, and she was named the 2018 Woman of the Year at the Lincoln Journal Star’s annual Inspire Awards. Martin was inducted into the Nebraska Business Hall of Fame in 2015, named a Nebraska Alumni Association Master in 2014 and inducted into the UNL School of Accountancy Hall of Fame in 2004. She’s been recognized by the Nebraska Society of CPAs and the Lincoln Partnership for Economic Development for her leadership and commitment to community service.

Martin’s legacy is one of servant leadership. The Martin years at Ameritas will be remembered for the company’s financial strength, passion for community giving and commitment to Ameritas customers, associates, financial professionals and business partners.

She is married to Derrel Martin, and they have two daughters and three granddaughters. Martin is an avid Husker sports fan and enjoys attending games when possible.

“I am proud of our leadership and their passion for fulfilling lives,” Martin said. “We have a strong team, and I believe in Bill’s vision. Together, we are setting the right future path.”

Lester began his career with Ameritas in 1983 as a securities analyst with Ameritas Investment Advisors. He earned his B.S. degree in business administration from the University of Nebraska-Lincoln and holds CFA (Chartered Financial Analyst) and FLMI designations. Lester has held many leadership roles at Ameritas.

Lester serves as board chair at Bryan Health, is a board member of the Lincoln Chamber of Commerce and is a trustee and committee member of the University of Nebraska Foundation. He serves on the board of directors of Universal Surety Company/Inland Insurance Company and the advisory board of U.S. Bank of Lincoln. He also is a member of the CFA Institute.

“JoAnn helped make Ameritas into the strong, customer-focused company we see today, and we will continue building on that momentum,” Lester said. “Ameritas is a thriving company focused on growth. I believe in our future, I appreciate our customers and I am proud to lead our outstanding team.”