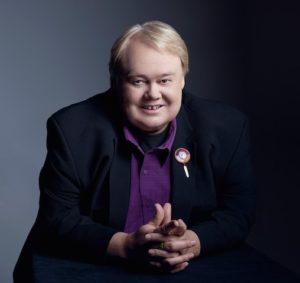 The Mooers Award Dinner will be held on Thursday, Nov. 1, 2018 during NAILBA’s 37th Annual Meeting (NAILBA 37) at the Gaylord Palms Resort and Convention Center in Orlando.

Iconic comedian Louie Anderson, a three-time Emmy Award winner, is one of the country’s most recognized and adored comics, and was named by Comedy Central as “One of 100 Greatest Stand­Up Comedians of All Time.” His career has spanned more than 30 years. Louie is a best-selling author, star of his own standup specials and sitcoms, and he continues to tour the country performing to standing-room-only crowds worldwide.

“I’m excited to announce comedian Louie Anderson as the entertainment for the Mooers Award Dinner,” said NAILBA CEO Dan LaBert. “Louie’s brand of comedic entertainment will certainly amuse and regale our members as they unwind from two full days of meetings, workshops, and panel discussions on strategies and tactics to advance their business and strengthen our nation’s independent life brokerage industry.”

As a standup comedian, Louie shares the ups and downs of his childhood experiences as one of 11 children in Minnesota. He crafted comedy routines that rang true for his early club audiences while reducing them to helpless fits of laughter; routines that led him from his career as a counselor to troubled children to his national television debut on the Tonight Show with Johnny Carson in 1984.

The rest is history. Leno, Letterman, The Late Late Show with Craig Ferguson, The Late Show with Stephen Colbert, “Comic Relief,” Showtime, HBO, and CMT specials followed, including hosting the legendary game show, Family Feud, making Louie a household name and opening doors for him as an actor. Louie has guest starred in sitcoms like “Grace Under Fire” and dramas like “Touched by an Angel” and “Chicago Hope,” and he has had memorable roles in films like “Coming to America” and “Ferris Bueller’s Day Off.”

American singer Janine Strange is the featured entertainer at NAILBA’s Opening General Session Thursday morning and will perform the national anthem. Strange is an entertainer, motivational speaker, and on-air personality best known for performing “The Star-Spangled Banner” in all 50 states and once set a record for performing our national anthem every hour, over a consecutive 24-hour period.

“NAILBA 37 attendees will be treated to an all-star lineup of distinguished speakers,” LaBert said. “From the battlefields, to concert halls, arenas, the gridiron, and the broadcast booth, this year’s roster of speakers will share their first-hand experiences on topics such as leadership strategies, challenges, team-building and more. NAILBA members will be energized and motivated to take their business, and our life insurance brokerage industry, to the next level.”

NAILBA’s Annual Meeting brings together senior-level representatives from life insurance carriers, brokerage general agencies, and insurance industry vendors from across the country. NAILBA 37 will be held from Wednesday, Oct. 31 through Friday, Nov. 2, 2018, in Orlando. General information about NAILBA’s Annual Meeting including speaker lineup, agenda, and opportunities to exhibit or sponsor can be found at www.nailba.org/nailba37.