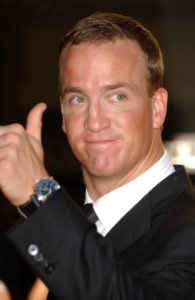 Peyton Manning’s pitch count expanded again this week when it was announced that the ubiquitous NFL quarterback has joined yet another new team. He will be featured in a Nationwide Insuranceadvertising campaign beginning this fall.

At a news conference in Denver announcing the partnership, Manning said, “I am a client so this is kind of a natural association. It makes sense because of some of the values we have in common. It’s a great fit.”

Manning’s role as pitchman is part of a broader deal between the Denver Broncos and Nationwide, which extends a previous deal that also includes media activities, in-stadium branding, hospitality and presenting sponsorship of Denver’s regular season-ending game against the Oakland Raiders on Dec. 28.

The deal solidifies Manning’s position as football’s biggest endorser and one of the most marketable athletes in America. In addition to Nationwide, Manning has endorsement deals with Buick, Papa John’s, Gatorade, DirecTV, Wheaties and Reebok. Representing this many different brands, there could conceivably be an NFL game where Manning is featured during every commercial break.

Will his new Nationwide spots be funnier than State Farm’s “Discount Double Check” campaign with Aaron Rodgers? Or the “Get smarter about your insurance” campaign from Farmers featuring J.K. Simmons? Flo at Progressive? Snoopy and the Peanuts gang at MetLife?

Who is your favorite insurance company spokesperson? Chime in on the forum.