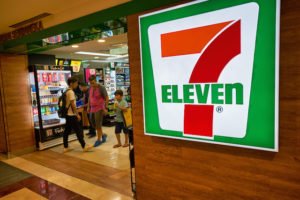 Want some cancer insurance with that Big Gulp?

Soon people will be able to buy life insurance at Seven-Eleven… in Japan.

According to a report in the Kyodo News, Seven-Eleven Japan Co. said Monday it will start selling life insurance at its over 20,000 outlets in Japan, the first such case at a convenience store, as the need for contactless sales grow due to the new coronavirus pandemic.

Japan’s largest convenience store chain will start selling cancer insurance from Mitsui Sumitomo Aioi Life Insurance Co. (MS&AD) on June 16 in an effort to expand its sales channels at a time when the coronavirus has made it difficult for agents to visit homes or meet customers in person.

A customer can apply for the cancer insurance through a multi-function copier machine/vending machine installed at Seven-Eleven outlets and also pay for it at the store’s cashier.

Seven-Eleven and MS&AD are planning to set up call centers where licensed insurance sales staff can talk to customers 24 hours a day, 365 days a year, to ensure the same quality of services offered by insurance shops.

Customers can also complete most of the process beforehand by using a smartphone or PC and preregistering online.

Seven-Eleven said it hopes to achieve 60,000 new subscribers per year, mostly elderly, to the insurance plans with a minimum monthly premium of 995 yen, or about $9.20, while another report said the monthly insurance fee will be set at several thousand yen.

In Japan, people can purchase socks, beetles, and origami, among other products from vending machines, Barron’s says. “Now, they can also get a decision about life insurance from ‘multifunction machines’ inside stores.”

Will it someday translate to convenience stores in the U.S.? Perhaps, if the program is successful.