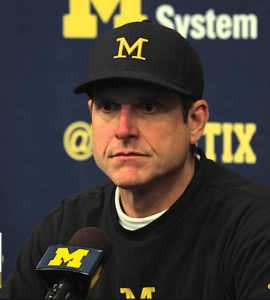 After going 10-3 in his first season as head football coach at his alma mater, Jim Harbaugh received a sizable raise from the University of Michigan this summer in the form of a life insurance policy.

The way Harbaugh’s raise was structured provides a nice, high-profile example of how life insurance can be used for executive compensation.

According to an ESPN article about the arrangement, the contract amendment means that in addition to paying his $5 million salary for each of the remaining six years on his original deal, Michigan will also loan Harbaugh $4 million in 2016 and an additional $2 million for the following five years to pay the premium on the life insurance policy.

The first payment was made on June 3, and each additional $2 million payment will be made each December starting this year – effectively brining his compensation to $9 million this season (which would make him the top-compensated college head coach ahead of Alabama’s Nick Saban, who earned $7.087 million last season while Ohio State’s Urban Meyer was third at $5.86 million according to USA Today).

As long as the insurance policy is in force, Harbaugh does not need to repay the loan until he dies. At that time, Michigan can recoup its original investment (without interest) while the rest of the death benefit would go to Harbaugh’s beneficiaries.

Harbaugh owns the insurance policy, and can take withdrawals or loans from it. The deal ensures Harbaugh’s heirs will get no less than 150% of the premium that has been paid, increasing the payout by $6 million in 2016 and $3 million each successive year. The “150%” clause means Harbaugh has to keep at least 150% of the premium value untouched, giving Michigan a cushion to make sure it gets its investment back. The university can also get its money back if the policy is surrendered or cancelled prior to Harbaugh’s death, or the money would come from Harbaugh if he were to exercise his option to terminate the policy in the event that his employment contract is terminated.

There was a clause to evaluate the deferred compensation clause after the first year of Harbaugh’s contract and this life insurance addition fulfills that clause. Discussions started under interim athletic director Jim Hackett back in December. Hackett, the former CEO of Steelcase furniture, laid the groundwork for the life insurance deal, which is a more commonplace form of deferred compensation in the corporate world.

Harbaugh’s base salary is $500,000 per year and he receives additional compensation (for radio, TV appearances and apparel contracts) of $4.5 million. Both are scheduled to increase by 10% after Year 3. He didn’t have the $2 million addendum his first year, but received a $2 million signing bonus. The whole contract will be evaluated again after Year 5 and if he is at “less than his fair market value,” they will renegotiate.

Even knowing Harbaugh’s age (52), his (very) general overall health and the premium payments, there so far has been a wide range of estimates about the value of the policy’s death benefit. One article estimated it to be in the neighborhood of $20 million; another said at least $35 million; while yet another said it could be more like $75 million.

• Care to venture your own estimate, or thoughts on life insurance for executive compensation? Please go to this thread: Michigan gives Harbaugh a raise via life insurance

NCAA Division I schools are also increasingly paying the premiums for “loss of value” insurance for elite players – and doing it through private underwriters rather than players having to pay for NCAA-sponsored disability insurance for “exceptional student athletes.”

Elite college football and basketball players (primarily) who had bright professional prospects would finance the premium and pay it when they signed their first pro contract. Now, colleges have realized that payments they receive each year from the NCAA via the “Student Assistance Fund” can indeed be used to pay insurance premiums for elite athletes.

A couple of years ago, Florida State paid about $55,000 for two policies totaling $10 million for 2013 Heisman Trophy winner Jameis Winston, who ended up as the first overall pick by the Tampa Bay Buccaneers in the 2015 NFL draft.

It has been reported that Clemson has paid for a pair of similar $5 million insurance policies for 2016 Heisman trophy candidate quarterback Deshaun Watson in the event he suffers a career-ending injury or suffers an injury that forces his NFL draft stock to plunge while playing football for the Tigers this fall.

The “loss of value” policies began to draw significant attention after former South Carolina star running back Marcus Lattimore’s second severe knee injury in 2012 – taking him from a projected first-round NFL pick to a fourth-round pick in 2013. Without “loss of value” coverage he lost out on millions of dollars and retired from playing football at age 23 without playing a regular-season game.

Former University of Oregon cornerback Ifo Ekpre-Olomu became the first player to collect on a loss-of-value policy in October 2015 because his draft stock dropped after tearing his ACL and dislocating his knee in a December 2014 practice in advance of the Rose Bowl. He fell to the seventh round of the 2015 draft, and after examining the claim, underwriter Lloyd’s of London paid him $3 million (and will pay him another $2 million if he never plays another down).

It is estimated that almost every projected first- or second-round NFL draft pick now has loss-of-value insurance.