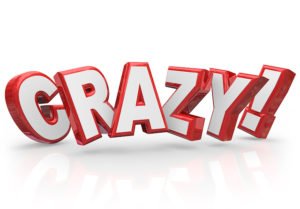 No doubt insurance is a serious business. But that doesn’t mean a lot of silly or curious things related to insurance won’t pop up in the news from time to time.

I’ve regularly checked back in and posted about cases of “Agents Behaving Badly” that sometimes border on the ridiculous (or ridiculously stupid), but not all strange happenings in the industry involve criminal conduct.

So without further adieu, here are a few of the more curious stories or trivial industry facts I’ve encountered recently. (And a couple of them still do involve criminal activity – but not on the part of licensed agents.)

Go, which bills itself as “the #1 iPhone app for car insurance,” last month announced that it had delivered the world’s first insurance policy by drone.

In announcing the “landmark” event, Go said the first customer delivery was completed during the first week of October in the Los Angeles area.

The world’s first insurance delivery drone customer, Ryan Klenz, 26, from Oshkosh, Wis., described his experience: “I found Go on the App Store, snapped my license, used Apple Pay, and chose ‘Drone’ for delivery. It was amazing. I can’t believe you can actually do that.”

“After snapping a photo and using Apple Pay, their insurance card and policy are instantly accessible in Wallet,” Go’s release said.

“We’re thrilled to bring another world-first to our customers who have always shared that one of the reasons they really like Go is because it’s so easy to use,” said Kevin Pomplun, Go’s Co-Founder and Chief Executive. “Also, customers tell us that Go lets them do exciting things with insurance that didn’t think were possible. Whether by Wallet, Drone, or Robot, starting today it’s even easier for customers to get their insurance with Go.”

Go was designed specifically for iPhone and is iPhone and Apple Pay only. Go is a nationally licensed broker backed by Munich Re. More info here.

According to an Oct. 15 story in the Daily Mail, inmates at some of Britain’s toughest prisons – including some convicted fraudsters – are being paid to cold call potential insurance customers and conduct marketing surveys.

One of the cold callers was a con man who ran a multimillion-dollar telemarketing scam with thousands of victims. 71-year-old Antoni Muldoon, who was jailed for seven years for fraud, said in the article he tries to find out as much information as he can.

“Every other call you are told to get lost or to stop ringing them. But sometimes you can get them talking. You say, ‘You might be interested in life insurance?’ and they’ll say, ‘No, I’m 65’ and you say, ‘I’m 71 and I’m still working.’ Obviously, you don’t tell them where you’re calling from.”

Unaware they are talking to an inmate, people who answer often provide personal information and are quizzed on their home contents, whether they own or rent, or have life insurance.

Inmates working for telesurvey groups within “call centers” set up in some prisons follow a script once connected via an automated system and chat to potential customers to try to persuade them to buy insurance. If the person shows an interest, the call is transferred to registered brokers outside the prison.

Marketing surveys using inmates at lower-security jails began in 2013 and is intended to help rehabilitate inmates by providing “meaningful work experience.” The Prison Service said “offenders are rigorously risk-assessed for suitability for the role and all calls are supervised and monitored.”

An Ohio teenager accused of fatally shooting her father was freed on bond that was posted using proceeds the mother of the teen acquired as the beneficiary of his life insurance policy.

According to a Hamilton-Middletown Journal-News story posted on Oct. 31, the then-14-year-old girl shot her 71-year-old father in the head at their Hamilton, Ohio, home in February and called 911 to report it. A judge has kept the case in juvenile court, but she was indicted for aggravated murder by a Butler County grand jury as a serious juvenile offender, which entitled her to bond.

An affidavit filed in court shows the man’s wife received $250,000 in life insurance benefits and used $30,000 to post the teen’s bond. The affidavit says those benefits also are paying for the girl’s legal defense.

There are 5% fewer divorces in states that expanded Medicaid

Say a couple in their 50s finds out one of them has cancer. In a state that did not expand Medicaid, they might have to consider getting divorced in order to protect retirement assets. Otherwise, they would have to spend down their assets in order to qualify for Medicaid, which would wreak havoc on their retirement plans.

If they get divorced and therefore split their assets, the government looks at them individually, so the sick spouse spends down assets to qualify for Medicaid while other spouse is removed financially from the situation.

This bit of industry history comes straight from the U.S. Census Bureau via their daily “Profile America” feature:

Many things we take for granted in current society actually had their beginnings in Colonial America. And many beginnings in Colonial America took place in Philadelphia. The first known life insurance company was called the “Corporation for Relief of Poor and Distressed Widows and Children of Presbyterian Ministers,” chartered in May of 1759. Benjamin Franklin was something of an inspiration, having helped launch the colonies’ first chartered fire insurance company in 1752, also in Philadelphia. Now, there are nearly 133,000 insurance agencies and brokerages in the U.S., with nearly 668,000 agents and workers. The insurance industry is a $107 billion a year sector of the economy.

And it recently came to my attention via Agency Checklists that the first auto insurance policy was sold 120 years ago to a Massachusetts man.

The story says that while many sites claim the first auto policy was sold in New York or Ohio, Travelers says it was actually in Massachusetts on Oct. 20, 1897.

Per the story, in 1897, Hartford-based Travelers issued the first auto policy, purchased by Gilbert J. Loomis of Westfield, Mass., an early auto pioneer who built the car he insured. Shortly thereafter, a policy dated Feb. 1, 1898 was issued to Dr. Truman J. Martin of Buffalo, N.Y. Martin was a physician who used his car to visit patients.

Loomis, Travelers says in a release about the anniversary, remained a Travelers policyholder for more than 60 years. The cost of his original policy was $7.50, which bought him $1,000 in liability coverage.