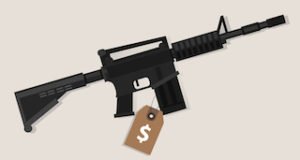 Lemonade, the 2-year-old peer-to-peer property and casualty insurer that offers renters and homeowners coverage in a select few states (with additional states being added), released a statement on Tuesday (Oct. 17) announcing that the company will limit the amount it will pay out for the damage or theft of firearms to $2,500 and will exclude assault weapons altogether.

The statement, coming from Lemonade CEO and Co-Founder Daniel Schreiber, is the latest unconventional step the company that bills itself as being “built on transparency and trust” has taken, and is listed as “Post #1” in its new “Ethics of Insurance” series. Schreiber says the company plans to broach politically and ethically charged topics periodically – and they picked a polarizing one to start with in wading into the gun control debate.

What follows is the complete text of Schreiber’s post, explaining the company’s decision to limit firearms coverage:

Guns, and why Lemonade is taking a stand

The 600 casualties from one of the deadliest mass shootings in U.S. history made us rethink our coverage

‘Guns’ is a polarizing topic, which is why most companies avoid it at all costs. But Lemonade was founded to make insurance into a social good. That requires being upfront about what we think ‘good’ is, and is not. When it comes to the Second Amendment, therefore, we can’t take the Fifth. After the awful massacre in Las Vegas, we’re not sure anyone should.

Our company, like our community, includes gun owners as well as gun control advocates. Many are both.

But while we respect gun ownership, we’re not into gun worship.

This is why our policies limit the amount we will pay out for the damage or theft of firearms to an entirely adequate $2,500. If you own more than $2,500-worth of firearms, we recommend trying one of our competitors. They seem to all offer additional coverage. We don’t.

Our policy already excludes coverage for any illegal guns or gun use, but in our next version we plan to add more protections around firearms:

As an insurance company, it falls to us to shield our customers from damage to their guns, and by their guns. It stands to reason that we want members who take the responsibilities of gun ownership as seriously as we do. And so, we’ll continue crafting our policies for the vigilant gun owner, not the vigilante gun owner. The former are welcome, and will find our policies cover them fully; the latter aren’t, and won’t.

We’re under no illusion that our industry, let alone our company, can solve gun violence. But being unable to change much doesn’t give us license to change nothing. Here’s to everyone doing their part.

Postscript: As a company built on transparency and trust, we plan to broach politically and ethically charged topics periodically, and to be open about our efforts to align our investment practices and insurance policies, with our best sense of what’s the right thing to do. This is post #1 in our new ‘Ethics of Insurance’ series.

Editor’s Note: The views expressed in the post above are solely the opinions of the author and do not necessarily reflect the views of Insurance Forums.