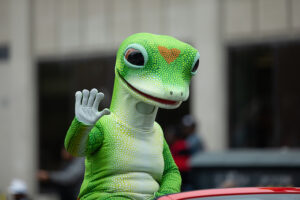 This week National Public Radio’s “Planet Money” took a shine to a recent Ad Age-Harris Poll about the most popular insurance mascots—and that in turn piqued our interest in the findings.

The story about the poll in Ad Age ranked the top nine mascots, which we’ll reveal here:

Yes, the critter that started it all—Geico’s gecko—still reigns supreme with viewers, according to the Ad Age-Harris Poll, which found that 40% of the respondents “strongly like” the lizard, while an additional 35% “somewhat like him.” That amounts to a 75% favorability rating—which the article says shows that viewers are not yet tired of the 23-year-old character that is backed by Geico’s hefty ad budget. Coming in second is Jake from State Farm, who notched a 69% favorability rating.

The Planet Money story delves into the origins of the GEICO Gecko, preceded by coming up with the famous “15 minutes can save you 15% or more on car insurance” tagline; the trouble people had pronouncing GEICO before it was a household name; and finally how an ad agency guy draws a picture of a gecko on a cocktail napkin at a hotel bar with a speech bubble coming out of his mouth that says, I’m a gecko. Don’t call me GEICO. He slides the cocktail napkin over to Ted Ward, who was in charge of advertising at a then much-smaller GEICO. “Just as a joke, says, hey, Ted, we should do this,” the story relates.

The GEICO CEO’s wife loved the gecko, and more commercials were made featuring it. And of course Warren Buffet buys the company and jacks up the advertising budget from about $35 or $40 million a year to $280 million two years later. And the rest is history…

But the real purpose of THIS story is to kick off a conversation on Insurance Forums about the rankings—what you agree with and what the poll may have gotten wrong.

So who’s the best insurance mascot, and which one makes you turn the channel?