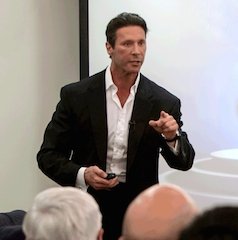 The idea of launching a business and becoming your own boss has always been part of the American Dream.

But many people balk when it comes time to make the move, and in 2015, a Gallup survey revealed why. The three top reasons people gave for taking a pass on business ownership were:

• They like the security of a steady income provided by someone else.

• They don’t feel they have enough personal savings to start a business.

• They worry that the success rates of a new startup are low.

It could be, though, that the real reason hindering those entrepreneurial urges is a common emotion that often gets in the way of people achieving their goals – fear, says William S. Wooditch, president and CEO of risk management and insurance services firm The Wooditch Group, a motivational speaker and author of “Always Forward! Discover the 7 Secrets of Sales Success” (www.BillWooditch.com).

“No matter how intrepid we may be, we all have fears, shadows of doubt or even deep seeds of insecurity,” Wooditch, shown at right, says.

People voice a number of excuses for their hesitancy to take risks. They say: “I don’t know enough.” “I’m too old.” “I’m not experienced enough.”

He says anyone who dreams of starting a business should consider these points:

• You are the guardian of your own success. Be active in taking steps that will improve your odds of success. For example, always be open to learning – asking questions and seeking answers. Avoid comparing yourself to others because that leads to frustration and disappointment.

• Stop feeding your fears. One of the best ways to face fear is through preparation. If you feel prepared for whatever task or goal has you worried, you lower the fear threshold. So instead of focusing on what can go wrong in launching a business, concentrate on what will help you be prepared so you can make things go right.

• Think and do. Many people think, but they choose not to do. Others act without giving much thought to what they are doing. The “think and do” approach is a learned habit, Wooditch says. “It will take your instinctive feel, your rational thought and your willpower to put the steps into action that create opportunities for your future,” he says.

If it’s your dream to start a business, Wooditch suggests no one is holding you back but you.“Just remember,” he says. “The only person in the story of your life who can develop the plot and change the outcome is you.”

About William S. Wooditch: William S. Wooditch, author of “Always Forward! Discover the 7 Secrets of Sales Success” (www.WilliamWooditch.com), is the founder, CEO and president of The Wooditch Group, a privately held risk management and insurance services firm. He is also the founder of Think Next, Act Now!, a learning forum that trains tomorrow’s entrepreneurs today.