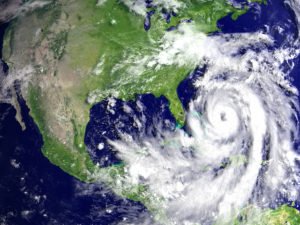 Natural disasters cost the U.S. a record $306 billion in 2017, according to data released this week by the National Oceanic and Atmospheric Administration.

The record total is mostly due to extensive property damage after Hurricanes Harvey, Irma, and Maria, plus wildfires in California.

The U.S. had 16 different disasters last year with damage exceeding $1 billion. While 2011 also had 16 billion-dollar disasters, the total cost from 2017 events was the highest ever, blowing past the previous record of $215 billion set back in 2005.

Here are some of the staggering numbers from 2017:

Christopher Swift, CEO of The Hartford, recently told reporters at an event in Hartford that property and casualty insurance rates are expected to rise following the string of natural disasters. He called it the “most expensive catastrophe season” of the last 30 or 35 years, totaling $135 billion industry-wide thanks to the hurricanes that devastated Florida, Louisiana, Puerto Rico, Texas and the U.S. Virgin Islands, and extensive areas in California being severely damaged or destroyed by fires.

According to a mid-December report from McKinsey & Company, the long-term impact on premium rates will depend on the willingness of investors to recapitalize and continue to invest. If investors get scared by a new trend of increased losses in the wake of natural disasters, rate increases may be substantial and contribute to the ending of a prolonged soft cycle.

The past year’s hurricane season highlights the need for a structural answer to the longstanding national insurance gap. Indeed, the increasing threat of catastrophe coupled with the large number of uninsured and underinsured individuals and businesses creates an opportunity, if not a responsibility, for insurers and policy makers to act.

“We expect prices to increase at January renewals—but prices would have been higher if the industry were not so capitalized and diversified,” the McKinsey report says, noting that the U.S. P&C industry had a record high surplus of $710 billion entering the 2017 hurricane season, compared with less than $600 billion when Sandy hit in 2012 and just more than $400 billion when Katrina hit in 2005. That 2017 surplus translates into $1 in surplus for every $0.75 of net premium written—the industry’s strongest claimspaying historical position. Since only a limited portion of the cost of HIM (Harvey-Irma-Maria) will be covered by the industry, even if insured losses total $70 billion, that would be a 10% shock to the surplus’s base—significant for sure, but not disruptive, the McKinsey report continues.

“Given the price pressure we observed these past few years, even a 20% price increase in property reinsurance rates would keep prices below their level three years ago.”