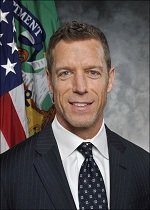 Michael McRaith, who has served as Director the Federal Insurance Office since its creation in 2011, is resigning his post as of Friday, Jan. 20, when the Trump Administration begins.

McRaith announced his plan to leave the agency during a meeting of an FIO advisory panel on Jan. 4. The former director of the Illinois Insurance Department was appointed to the FIO post in March 2011 by Treasury Secretary Timothy Geithner.

The FIO was created by the Dodd-Frank Act in 2010 to monitor insurance markets and insurance regulation, but has no regulatory power. It operates within the U.S. Department of Treasury and advises Congress on insurance markets, helping to lead U.S. interests on international insurance issues, and advising various federal entities on insurers’ systemic risk exposure.

As Director of the FIO, McRaith advised the Geithner on domestic and prudential international insurance matters of importance. The FIO Director also serves as a non-voting member of the Financial Stability Oversight Council (FSOC), represents the United States at the International Association of Insurance Supervisors (IAIS) and in other bi-lateral and multi-lateral international insurance matters. McRaith also served on the IAIS Executive Committee and as Chair of the IAIS Financial Stability and Technical Committee.

Leigh Ann Pusey, president and CEO of the American Insurance Association (AIA) and one of the most influential P&C insurance lobbyists in Washington, issued the following statement in response to McRaith’s announcement:

“AIA thanks Director McRaith for his service. As the nation’s first Director of the Federal Insurance Office, he has been a steadfast advocate for our industry. Established by the Dodd-Frank Wall Street Reform and Consumer Protection Act, FIO provides a centralized national resource to help represent U.S. interests abroad on prudential insurance matters, as well as a platform for dialogue with the state regulatory community to advance an effective and efficient state-based insurance regulatory system. The Director has propelled FIO forward in these roles during his time there and this is a credit to his leadership.”

As mandated by Dodd-Frank, the FIO releases an annual report on the insurance industry (see 2016 report here), including an overview of the domestic insurance industry and analysis of the financial performance and condition of both the Life & Health and Property & Casualty sectors.

Back in 2013, the FIO released a much-anticipated report on ways to modernize insurance regulation, which essentially concluded that while federal involvement in insurance regulation in the U.S. is sometimes necessary, overall it is best left to a hybrid model where both state and federal regulatory bodies have complementary roles.

No successor has been named, and no timetable has been released for filling the position. If President-elect Trump’s nominee to succeed Jack Lew as Treasury Secretary, Steven Mnuchin, is indeed confirmed, Mnuchin would be responsible for appointing McRaith’s successor.