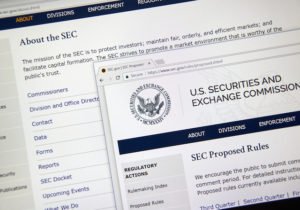 The Securities and Exchange Commission’s recent introduction of a proposal that would modernize the process of disclosing information about variable annuities was met with cries of “it’s about time” from annuity industry advocates.

The SEC proposal for new rule 498A under the Securities Act, released Oct. 30, would modernize disclosures by using a layered disclosure approach designed to provide investors with key information relating to the contract’s terms, benefits, and risks in a concise and more reader-friendly presentation, with access to more detailed information available online and electronically or in paper format on request.

“This proposal is another important step in the Commission’s efforts to provide Main Street investors with better information to make informed investment decisions. I have participated in many roundtables with retail investors over the last several months, and investors have emphasized their preference for clear and concise disclosure,” said SEC Chairman Jay Clayton. “Providing key summary information about variable annuities and variable life insurance contracts to investors is particularly important in light of the long‑term nature of these contracts and their potential complexity.”

A Nov. 6 legal alert from Eversheds Sutherland says the proposed rule is the most significant advancement in variable contract disclosure since the adoption of registration statement forms specifically designed for variable contracts. “The proposals (and accompanying requests for comment) are also an opportunity to further modernize a disclosure regime that has clearly become outmoded, costly, and, perhaps most importantly, ineffective,” the brief says. “At the same time, in some ways the proposals may present some challenges for the industry to implement cost-effectively from a resource perspective.”

The brief concluded by saying interested parties will be well served to study carefully the details of what the Commission has proposed and to comment on those aspects that can be refined or improved.

A more consumer-friendly method of disclosing essential information about variable annuities has long been on the minds of many industry advocates.

“This has been a top priority for our industry for 10 years,” said Cathy Weatherford, Insured Retirement Institute (IRI) President and CEO. “Consumers should receive useful information about the products that they buy but the amount of currently required information in a typical prospectus is so complex and overwhelming that few consumers even read it. That helps no one.”

Convincing the SEC to permit the use of a summary prospectus for variable annuities is among IRI’s top issue advocacy priorities and contained in the organization’s annual Advocacy Blueprint.

Full statutory prospectuses for variable annuity products can range from 150 to 300 pages and contain language that most ordinary investors would find difficult to understand. As a result, full prospectuses are rarely used by most investors, with less than 3% of investors saying they always read some part of the prospectus.

“A variable annuity summary prospectus is consistent with the Commission’s move towards layered disclosure,” Weatherford said. “This approach is designed to give investors the discretion to choose how much information to review and how to view it. It would provide investors only the essential information, while still providing investors access to more detailed information online or in hardcopy, at the investors request.”

The proposed new rule would permit a person to satisfy its prospectus delivery obligations under the Securities Act of 1933 for a variable annuity or variable life insurance contract by sending or giving a summary prospectus to investors and making the statutory prospectus available online.

“We are greatly encouraged by this action and will be scrutinizing the SEC’s proposed rule very carefully and will provide input into the rulemaking process,” Weatherford said. “We are grateful to SEC Chairman Jay Clayton for establishing this action as a priority and following through with this proposal.”

The American Council of Life Insurers (ACLI) also voiced support for the proposed rule. “Life insurers’ efforts to help consumers make informed purchasing decisions complements the industry’s continuing commitment to act in the best interest of consumers and dovetails with another SEC initiative, the proposed Regulation Best Interest, which is slated to be issued next year,” said ACLI President and CEO Susan Neely. “We salute the SEC for taking these pro-consumer steps. ACLI has actively engaged with the SEC over many years on projects to enhance the transparency of life insurance industry products.”

Still, not everyone is convinced the proposed rule will actually move the needle in terms of helping consumers understand variable annuities.

“While I agree that variable products’ prospectuses are overwhelming for the consumer, and almost never read, I have to question how effective the summary prospectus will be,” said Sheryl Moore, President and CEO of Moore Market Intelligence and market research firm Wink, Inc. “The average non-variable annuity contract is 26 pages; how often is it read? While a non-variable annuity contract is inarguably less intimidating than the prospectus, I don’t think the consumer understands it any more.”

The bottom line, Moore says, is that consumers don’t understand legalese. “The more we can communicate these complex instruments in easy-to-understand terms, and worry less about covering our butts, the more relationships we are going to forge with consumers and salespeople alike,” Moore said.

The Commission has requested public comment on the proposed rule changes, as well as on hypothetical summary prospectus samples that it has published. The Commission has also published a Feedback Flier that it will use to seek investor input about what improvements would make the summary prospectus easier to read and understand, and what information investors would like to see included.

The public comment period will remain open through Feb. 15, 2019.

“Despite introducing of new products and making changes to enhance their existing products to make them more competitive, companies are not having the same success with VAs as they are with fixed annuities,” said Todd Giesing. LIMRA SRI annuity research director. “However, the new and enhanced VAs, combined with the vacated DOL rule and better economic conditions, have led to slightly improved sales.”