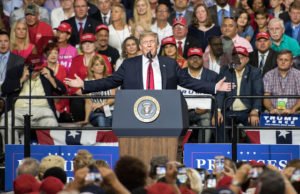 U.S. District Judge Richard Leon in Washington ruled against the insurance companies that sued the administration in an attempt to block the new rules, which took effect in October 2018.

“Not only is any potential negative impact from the 2018 rule minimal, but its benefits are undeniable,” Leon wrote in a 40-page ruling about the regulations.

The Trump administration issued a regulation last year allowing short-term health care plans to last up to 364 days instead of just three months, and can be renewed for three years. The plans were originally intended as an option for individuals who need to bridge a gap in health insurance coverage rather than as a longer-term solution.

The Trump administration extended the length of time they can cover to provide customers with more affordable options and as a way to circumvent plan requirements under the ACA, furthering efforts to “undo” Obamacare.

The plans generally cost less because they don’t have to comply with coverage requirements set by the ACA, such as maternity care and prescription drugs. The short-term plans can also deny coverage to sick people, which ACA plans are prohibited from doing.

It should be noted that the availability of short-term plans varies from state to state. Some states have much tighter restrictions on short-term plans, and insurers choose to offer different plans in different areas.

In September 2018, a group of seven plaintiffs (representing health insurers, physicians, and consumer advocacy organizations) sued the Trump administration to stop the short-term care plan expansion, claiming it put ACA-compliant insurers at an unfair disadvantage because they’re required to cover these services and must charge higher premiums to do so. They argued the availability of short-term plans could draw away their healthy, young customers who might not feel like they need comprehensive insurance.

Judge Leon wrote in his ruling that the plaintiffs were unable to prove that the changes actually impacted their enrollment in 2019.

The Association for Community Affiliated Plans (ACAP), the plaintiff in the case, said in a statement it would appeal the decision.

“We remain firm in our contention that the Trump administration’s decision to expand dramatically the sale of junk insurance violates the Affordable Care Act and is arbitrary and capricious. We are confident that the appellate court will see this differently,” said Margaret Murray, CEO of ACAP.

Senator Susan Collins of Maine was the only Republican to vote for a Democratic resolution opposing the short-term plan regulation back in October, saying at the time it is essential that people with pre-existing conditions are covered.

“Junk plans are no substitute for meaningful health insurance but are instead cynical attempts to lure families and individuals into cheap and insufficient coverage. Junk plans do not protect you if you get sick, can discriminate against people with pre-existing conditions and leave you on the hook for costly medical bills.

“The House of Representatives passed my bill, H.R. 1010, in the Strengthening Health Care and Lowering Prescription Drug Costs Act to help Americans from being defrauded by junk plans that do not cover preexisting conditions, hospital stays, prescription drugs and other basic care.

“By promoting junk plans, the Trump administration is sanctioning higher health care costs for American families. The Energy and Commerce Committee heard direct testimony on this point on March 12, 2019.

“Such testimony and evidence led to adoption of my Strengthening Health Care and Lowering Prescription Drug Costs Act to halt the Trump administration’s expansion of these dangerous junk plans. It is imperative that the Senate immediately take up my legislation. I will continue to stand up and fight Republican efforts to take away comprehensive health coverage and increase health care costs – especially for my fellow Floridians and Americans with preexisting conditions.”

Castor sits on the U.S. House Energy & Commerce Committee, where she has oversight on federal health care initiatives, and helped to create the rules and standards in the ACA.

“Just as important as health care accessibility is health care quality and affordability. [Friday’s] ruling is a serious blow to both. Allowing companies to offer low-quality health insurance plans that don’t cover pre-existing conditions leaves hundreds of thousands of my constituents at serious risk.

“Unlike the Administration, I am committed to protecting New Mexicans with pre-existing conditions, which is why I voted to protect them in May and will continue to going forward.”