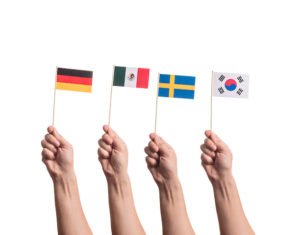 The world isn’t flat. And that may come as news to some flat-earthers. It’s round and it’s shrinking. The globalization of the planet through lightning fast communications, currency exchanges and international trade agreements is almost creating a borderless map with an international emerging status called “citizens of the earth.”

It sounds a bit like science fiction, but it’s a cosmic fact. Global citizens are buying homes, investing in real estate and marrying citizens from other countries outside their own nation like never before.

In the U.S. there’s a growing segment of America’s population, no longer limited to living in the gateway cities of New York, Los Angeles and Miami. Case in point, 21% of Las Vegas residents are foreign born. The American foreign market is virtually untapped by financial advisers, who are either unaware of this demographic group or the rules of engagement for people who are not U.S. citizens.

Immigration status is very important in the foreign national market. The resident alien market is defined as non-U.S. citizens who live in the U.S. The number of married couples comprised of foreign nationals and American citizens is significant. Back in September of 2013, USA Today posted an article with the headline, “1 in 5 married households in the USA has a foreign spouse.” The article goes on to say that 61% are naturalized citizens and 35% are non-citizens according to the Census Bureau. So that’s just one segment of the foreign market.

It’s been said that love knows no bounds and apparently no boundaries. Again, the number of married couples comprised of foreign nationals and American citizens is significant. This segment of our society is the easiest entry point into the foreign market and a huge opportunity to advertise an adviser’s practice online. You can gift the annual exclusion, currently at $15,000. But it’s relatively small (some planners call it the amount that doesn’t count.)

A relatively unknown financial planning concept called the “super annual exclusion” is $155,000 from nonresident aliens to their American spouses. Many planners in this arena use the $155,000 to leverage the amount to the spouse to purchase life insurance because there is no unlimited marital deduction. This is a planning tactic worth exploring.

Foreign nationals employ an international team of accountants and attorneys to layer various entities and trusts interwoven between foreign partnerships, U.S. partnerships and owners of U.S. real estate. Sound complicated? It can be. Multi-jurisdictional planning requires initial fees as well as ongoing administrative expenses. Some structures may fall into a gray area, and there may be some question as to whether or not the elaborate plan will work to shelter U.S. assets from U.S. estate tax.

Sometimes using a life insurance policy is a straightforward solution to the complex financial planning challenges presented by a nonresident aliens (NRA). As an example, a non-U.S. citizen, an NRA with a considerable U.S. estate can buy a life insurance policy on their own life, and the U.S. estate will not increase because the plan may not require a trust, gifting of premiums, attorney’s fees or Crummey letters. NOTE: Not all countries will allow their citizens to own a U.S. policy outright.

Immigration status is very important in the foreign national market. The resident alien market is defined as non-U.S. citizens who live in the U.S. The prospects in the foreign market have a paltry $60,000 estate exemption with no unlimited marital deduction. Qualified Domestic Trust (QDOT) planning can help mitigate some of the tax issues with foreign nationals.

Interestingly enough, all worldwide assets are subject to estate taxation. Often advisors are unaware that a solution is available or fear they will not be able to offer a solution when the client is a non-U.S. citizen. Once the status of a resident alien is established, the rules of engagement for that particular people group can be applied.

Nonresident aliens (NRA) owning businesses, homes, investments and other assets are generally upper middle class to the uber wealthy. With lifetime estate tax exemption of only $60,000 ($13,000 credit against estate tax) and the same estate tax rate table as U.S. citizens, a huge untapped market exists. There are planning alternatives such as changing tangible property into intangible property or making gifts of intangible property an NRA’s lifetime during life to their heirs. Structured correctly, there may be no estate tax or gift tax; however the client loses asset control. So, some set aside liquidity accounts could be a solution to mitigate the control concerns.

This could be a shot in the arm that you’re looking for as a financial professional. Basically, it’s an untapped wealthy market with little competition, as least for now. This could really benefit the practice if operate near military bases, hospitals, universities, research firms or corporate headquarters of international companies.

Steve Savant is a syndicated financial columnist, talk show host and popular platform speaker. Steve is a nationally recognized videographer, content creator and co-contributor to Advisys, Insmark and LifeSpecs. Steve’s videos and content are distributed to over 280 media outlets and 200,000 Twitter users. To contact him visit www.lifesizesolutions.com, email [email protected] or call (520) 261-4599.