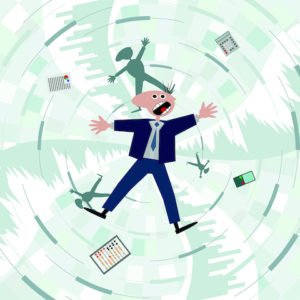 More and more life insurance companies are selling their policies online these days.

To a buyer, this approach has the appearance of being easy. He or she can open a web page and apply directly with the insurer. Some insurers entice with statements that imply an easy process, such as; “Everyone gets coverage,” or “For only $1 you’re insured.”

Even though the cost of a policy bought direct from the carrier online is exactly the same as if the policyholder bought it through an agent, to many people there’s the perception that they’re saving money by working directly with an insurer because in their mind they are cutting out the “middleman.” But these people are running a colossal risk by not using a life insurance agent.

In this day and age of everyone trying to disrupt old business models, the traditional method of selling life insurance – from an agent to a buyer – may not be in fashion. But in this same day and age, when disruption equates to eliminating qualified counseling and advice for the sake of profit to the business, buying life insurance from an agent may be more important than ever.

For each of these reasons, and many more, the value of having a licensed life insurance professional lead a buyer through the process of understanding the policy features cannot be overstated. But, after speaking with hundreds of beneficiaries of denied life insurance claims, it’s obvious that agents bring an even bigger value to buyers than just explaining policy features.

Agents protect against one colossal risk, which causes claims to end up in what I call the “Pit of Denied Claims.”

By our estimates at the Center for Life Insurance Disputes, a staggering six times more claims are denied when the policy was purchased without an agent than those purchased with an agent. Thus, the colossal risk of buying life insurance without an agent is that nothing gets explained when completing the application. The result is an application much more likely to include unintentional misstatements of information which will dramatically increase the chances of a claim being denied.

“Have you been treated for sleep apnea?” is a specific question and is likely understood by many applicants. However, most people think of a respiratory disorder as COPD or asthma, not as sleep apnea. When answering this application question without the help of an agent, it’s commonly misunderstood and answered incorrectly. With an agent, the applicant can ask and get a detailed explanation about the full extent of the question. Without an agent there’s no one to ask or explain such a question. With an agent, the underwriter can be contacted to determine exactly what the applicant needs to disclose. Without an agent, there’s no access to an underwriter to get any answers.

The person who was treated for sleep apnea, and understands sleep apnea as a sleeping problem rather than as a respiratory disorder, will answer ‘No’ to the respiratory question on their application. When he or she dies and a claim is made on the policy, the insurer will mark this answer as a material misrepresentation and the claim will fall into the Pit of Denied Claims with a letter mailed to the beneficiary that says: Claim Denied.

For no extra cost, any applicant can have the expert guidance of a licensed life insurance agent advise them through the application process and keep their claim out of the Pit of Denied Claims.

It may seem like the 22-question application is simpler, but in fact it’s much more likely to cause confusion because the 22 questions are worded in generalities. The no-agent insurer’s application asks about any disease of the lung? This question is general and may not trigger an understanding by the applicant of the full extent of the question. The applicant of the no-agent insurer has no one to counsel with. He or she will mark their answer and be issued a policy that can be contested for the next two years.

The agent-insurer’s application, by contrast, names seven lung-related conditions, and is specific. Further, the agent-insurer pays an agent to assist the applicant. Specific questions leave less room for misunderstandings, so claims aren’t contested. General questions are much more likely to lead a claim into The Pit.

Being a life insurance agent means the person’s knowledge of life insurance was examined by a state’s Department of Insurance – a government agency tasked with creating and monitoring standards and ethics for selling insurance policies. It’s a professional certification that has to be obtained by passing a test and maintained with continuing education. These licensed professionals bring significant value to the life insurance purchasing process. They’ll sit with a buyer to answer his or her questions about policies, accurately document health history, and walk the applicant through the application process.

Life insurers put significant effort into investigating claims for the purpose of denying them. For more than any other reason, life insurance claims are denied for mistakes in application answers.

People who are buying life insurance because they want to provide money to their family when they die have a much better chance of doing so by using an agent. They minimize the colossal risk of misstating information, and therefore steer clear of the Pit of Declined Claims.

About the author: Stephen C. Burgess is the President of the Center for Life Insurance Disputes, which represents beneficiaries of denied life insurance claims. Mr. Burgess is a Life & Disability Analyst and has been a licensed life insurance agent since 1991. He is an MDRT Qualifier and GAMA Award winner. Among his duties as a Regional Director for a major life insurer from 1995 to 2008, he provided sales training to hundreds of life insurance agents. For more information call 888-428-4868 or visit www.cflid.com.