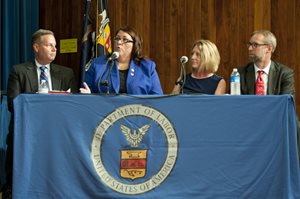 In testimony before the Employee Benefits Security Administration of the Department of Labor on Tuesday, NAIFA President Juli McNeely told the panel that the proposed fiduciary rule is unworkable because it could harm the advisor-client relationship and hinder access to affordable advice to smaller- and mid-market consumers and businesses.

McNeely testified on behalf of NAIFA’s 40,000 members who primarily serve smaller markets. As a small business owner in Spencer, Wis., McNeely said her practice comprises three support staff and three other advisors, with 52 small-business owners, all of which employ 25 employees or less. Of McNeely’s 484 individual clients, the average account size is about $71,000. NAIFA has long stated that the DOL rule, as proposed, could force many NAIFA members to reduce services to these smaller individuals and businesses.

“The key to my practice is to focus on creating new savers,” regardless of their account size, McNeely said. “It’s important that advice is given to all individuals…I believe this proposal would result in lower savings over time, and I know that’s not what the Department intends.”

McNeely addressed three topics concerning the DOL rule that she said would hinder advice (see NAIFA’s comments to DOL): 1) the impact the rule could have on compensation models (fee v. commission); 2) the potential costs to retirement savers should the DOL rule move forward as is; and 3) the Best Interest Contract exemption, which would require consumers to sign a complicated contract prior to receiving advice.

While McNeely’s practice operates under both fee- and commission-based compensation models, McNeely said she believes that fee-based advisors would “win” under the current proposal because their clients are accustomed to paying fees for service. Surveys show that most NAIFA members’ clients prefer the commission-based model and would not be able to afford costly fees. In addition, McNeely said, most fee-based advisors would not consider serving smaller-market accounts. “My minimum investment is $50,000 to work with a client, and many are under that threshold… Everyone should have a choice on how they compensate their advisor.”

In testimony from Dr. Jennifer Knoll, McNeely’s client, Dr. Knoll said she is “very comfortable with the compensation arrangement Juli and I have. I know she puts my best interests first.”

McNeely also told the panel that the DOL proposed rule would result in the loss of advice to consumers. For example, clients who change jobs turn to McNeely for advice on their 401ks, many of which have balances as low as $5,000. “Many don’t know what to do with the account and it could be a daunting process if you are not familiar with what is available” for 401k rollovers. McNeely is concerned that without advice, many investors would cash out their 401k and be subjected to taxes and penalties, resulting in a loss of retirement savings.

McNeely closed her testimony with concerns about the Best Interest Contract exemption. Under the DOL proposal, advisors could continue to serve clients under commission if clients agree to sign a complicated, confusing and costly contract. The Best Interest Contract is burdensome and unworkable in the real world of middle- and lower-income retirement investors, McNeely said.

In the question-and-answer session, McNeely was asked about the role annuities have in retirement savings. McNeely told the panel there is “a strong purpose” for annuities in any retirement plan because of the lifetime guarantee, “especially for those who have not had the ability to put huge sums away” throughout the career.

• See NAIFA’s concerns and recommendations on the proposed rule in a new video and infographic.

Public hearings on the proposed rule started on Monday and continue through Thursday, Aug. 13. More than 400 groups have asked to participate in the hearings.

At last week’s Advisor Network Summit in Las Vegas, Chip Anderson, Executive Director of the National Association for Fixed Annuities (NAFA), briefed the audience on NAFA’s concerns regarding the DOL’s proposed Fiduciary Rule. Anderson said he believes that as proposed, the rule would create the wrong execution of the right idea.

“We believe in a lot of the things the proposal stands for, but it’s the execution of this [rule] that is the problem we have to deal with,” Anderson told the audience.

There are some important things that associations like NAFA and NAIFA are working to change before a new fiduciary rule goes into effect. As currently proposed, Anderson says simply handing a brochure to someone about fixed annuities would make you a fiduciary. “These things could be changes with some consideration by the DOL,” he said.

“Ultimately, this will result in less choice and access for middle-class consumers,” Anderson said. “It is intended to help Americans, but it’s going to do the opposite. It’s going to make advisors like yourself walk away from a significant part of the market.”

Anderson also expressed frustration that there is no plan under the proposed rule on who determines what the best product is for a client. “Don’t you think before they put forth a 250-page proposal, they would think through how the regulation is going to work?” Anderson said. “Who is going to determine what the best product is for that client? How many different products do you have to show in order to prove that you acted in the client’s best interest?”

NAFA filed a 25-page comment letter with the DOL on July 21. He also said NAFA was recently granted an audience with DOL representatives to discuss concerns with the proposed rule, which he said went very well and led to NAFA’s decision not to participate in this week’s hearings. “They were interested in what we had to say,” Anderson said. They don’t really understand many of the features and benefits of the products. The meeting went very well.”

Anderson concluded his remarks at the Advisor Network Summit by imploring advisors to get involved and stay up to date with what happens with the DOL’s proposed rule.

“This is not a good situation for anyone who deals with qualified money,” Anderson said. “Non-qualified money would likely come into play in coming years if they get this proposed rule through.”

He also said that if the rule as proposed goes into effect and he were an insurance advisor, he would retire, because he would not want to become a fiduciary. “We need to continue working to make sure that – as proposed – this doesn’t go through.”

NAFA has also scheduled a webcast for Tuesday, Aug. 25, to discuss the potential business-threatening implications for advisors of the proposed rule. The webcast, featuring Anderson and NAFA colleagues Pam Heinrich and Cliff Andrews, will begin at 11:30 a.m. Eastern time. Register for the free event here.