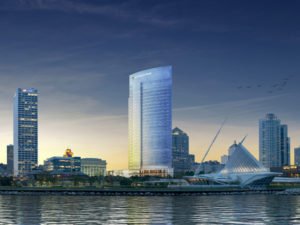 VISIT Milwaukee estimates the annual meeting will have a local economic impact totaling about $12.9 million, including more than 13,000 hotel room nights.

Northwestern Mutual says the 134th annual meeting is focusing on development of the company’s field force through networking, mentoring of peers, sharing of information and ideas, best practices discussions and continuing education courses.

“We place great value on improving our relevance with clients, policyowners and potential clients,” said John Schlifske, chairman and chief executive officer of Northwestern Mutual. “Many people are facing challenges with financial planning throughout their life stages. We continually evolve to focus on helping people overcome those challenges and meet their long-term financial security goals.”

Meeting highlights include a private concert by the Grammy Award-winning indie pop band “fun.” and a keynote address from Forbes Magazine publisher Rich Karlgaard, who features how Northwestern Mutual has established and nurtured trust throughout its history in his new book, “The Soft Edge.”

The company also said it will reflect on its “strong financial performance so far in 2014.” Northwestern Mutual expects to distribute more than $5 billion in dividends to policyowners this year.

The Northwestern Mutual annual meeting is the largest convention of the year in its headquarters location of Milwaukee. In 2013, the company unveiled plans for its new headquarters building in downtown Milwaukee, which will feature 1.1 million square feet of space, retaining 1,000 jobs downtown and bringing 1,900 new jobs to the city.

Construction begins this year, and the project is expected to be completed in 2017. It is being called the most significant office development in Milwaukee in the past 40 years.