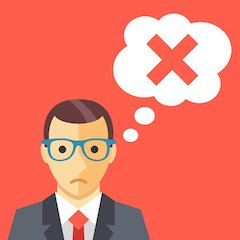 “Martha has so much going for her, but she could be doing so much more for herself.” How many people do you know or work with like that? What keeps us from getting to where we want to be or what we want to do? Sure, it may be a lack of the right skills, bad luck, having other goals, or just being plain lazy.

More likely, however, the answer is elsewhere and much closer to home. We can call them “everyday” attitudes that are so much a part of us we don’t know the damage they’re doing. Here are some of them:

1. “For what I get paid, I do more than enough.” Surprise! You’re probably right. With so much pressure, it’s easy to feel this way today. Even so, it’s the attitude that’s the problem. Otherwise pleasant people become angry, obstinate, negative, and alienated. It’s not the way to move ahead — or even stay where you are.

2. “I’ve put in my time and paid my dues. Now, its my turn.” It may be a choice parking space, extra time off, a plum territory, a promotion, or bigger accounts. It doesn’t make any difference what it is; it’s easy to spot someone with a chip on their shoulder. Their attitude sends the unmistakable message that this person thinks they are special or entitled.

3. “Sorry, but I’m really busy right now. Can’t you get someone else?” When asked to step in and help solve a problem, work on a project, develop a plan, or handle a difficult situation, some people make it clear that they can’t be counted on when needed.

4. “They’ll see what happens when I leave. It’ll take three people to replace me.” Even though we know that no one is indispensable, it’s tough for some people to get past the idea that they are the one exception. If asked, they’re quick to let it be known that they carry far more than their share of the load. Those around them often see it quite differently.

5. “Whoa! There’s only so much I can do.” It’s like the parent who installs a “speed limiter” on their kid’s car — only so fast and that’s it. Others put self-imposed limits on what they can or will do. By always playing it safe, they deny themselves the opportunity to see how much they can accomplish.

6. “With so many meetings, I can’t get my work done.” You’re not alone if you feel this way. Companies are plagued with meeting mania that wastes time and creates stress. Don’t complain; do something about it. Take a “how we can improve it?” approach: meeting alternatives, requiring agendas that go to participants beforehand, stand up sessions, setting time limits, and three-question participation evaluations.

7. “That’s not my job.” Not long ago, “silos” was at the top of the corporate jargon list — work groups, units, departments, and divisions operating totally separate from others. But countless individuals wall themselves off as if they are completely isolated from the organization. They “write their own job description” and stick to it.

8. “I’m a hard worker.” Like beauty, hard work is in the eye of the beholder. Each of us has their own personal definition of what it means to them. But, frankly, it doesn’t make any difference what you and I may think it means. Pampering ourselves is out. Simply put, no one “earns points” or merits a “reward” today for hard work. What counts is measurable and it’s called results.

9. “Unless I get paid extra, I shouldn’t have to do it.” This is a tough one. An employer’s demands can go too far. And employees can be shortsighted by putting on the brakes too quickly and miss opportunities for taking on tasks that can showcase their capabilities and demonstrate their skills.

10. “Sorry, but I don’t know anything about that.” It’s not unusual to hear those words, particularly when contacting customer service. But that’s far from the only place. Unfortunately, they’re all too common throughout most businesses, sending the message that the person has stopped growing.

11. “My ideas aren’t important.” Not true! Whether they know it or not, most people have ideas and suggestions that can benefit a company. They not only do their job, but they think about what’s going on around them. But potentially helpful suggestions are kept to themselves. It’s a mistake. If you’re one of them, take a chance because someone wants to hear from you.

12. “I meant to get it done. I’ll get right on it.” Why do some people agree to do something — and then ignore it by doing nothing, even after getting reminders? Sure, there are times when we all forget and a reminder helps. But, others can be chronic offenders and fail to respond even when offered help, being nudged, cajoled, and confronted. Everyone knows them: “If you want it done, don’t bother giving it to Brad.”

13. “The rules don’t apply to me.” Even though the words may never be spoken, actions make their meaning abundantly clear. Chances are, these are people who won’t be around much longer.

14. “I didn’t know you needed it so soon.” This just might be the most insidious attitude of all for one reason: It’s patently pathetic in its intent. While the words sound so innocent and disarming, it shrouds the fact that those who use this excuse portray themselves as victims. It’s not their fault the work didn’t get done; they didn’t know when it was due. Did they ask? Of course not. They blame someone else for not letting them know.

More often than not, it is self-justifying and defensive attitudes that kill success. Rather than allowing someone to think we could have done more, perhaps much more with ourselves, how much better is it to have them say, “She’s done so much with herself. More than I ever thought she would.” We can call that success.