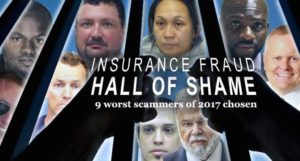 It’s shocking what some people will do for insurance money. A kindly man’s best friend burns him alive… a doctor sticks needles and lasers into patients’ healthy eyes… a father kills his baby. These extreme schemers are among the 9 worst insurance criminals of the past year, who were all inducted as the “No Class of 2017” to the “Insurance Fraud Hall of Shame” by the Coalition Against Insurance Fraud (CAIF).

The No-Class of 2017, announced Feb. 6, spotlights the year’s most brazen, bungling or vicious insurance fraudsters. The CAIF says insurance fraud amounts to an “$80-billion national crime wave,” driving up premiums for all Americans.

Here’s a closer look at each of this year’s nine infamous inductees courtesy of the CAIF:

David O’Dell was a gentle man, mentally slowed by a head injury. He lived alone in an old wooden house. O’Dell considered Joseph Meyers his best friend. Meyers considered O’Dell disposable. He and his wife burned Meyers alive in his home to upgrade their lives with insurance payouts in upstate Wayland, N.Y.

Insurance money was the couple’s gateway to the good life. They bought O’Dell’s house from him, and let him keep living alone there. The couple insured the old place and wife Iryn Meyer’s possessions for about $125,000. They secretly bought a $40,000 life-insurance policy on O’Dell as well.

Fraud clues quickly added up. Experts discovered “ignitable liquid patterns” on a wood-burning furnace in the basement. That meant someone intentionally set the fire. And surprise… a blow torch was found at Joseph’s business.

Joseph’s cell phone records also tracked the couple to O’Dell’s house just hours before the fire. Security video from Joseph’s business helped track their movements as well. Instead of that snazzy new double-wide, Joseph and Iryn will spend 23 years to life in cramped jail cells. They were convicted of arson, insurance fraud, murder and other crimes. Read full story

Investigators busted the scheme after tailing one of Young’s vehicles. The old heap never moved and was in such lousy shape that Young towed it to an insurance office to file a claim. Yet he lied that it was damaged in a collision that weekend. Young was towed to state prison for 10 years. Read full story

Foggy addicts laced with heroin and other drugs trooped to Kenny Chatman’s sober homes, anxious for a clean life. Instead, the Palm Beach, Fla., entrepreneur plied them with more drugs in sober homes that often were little more than grimy flophouses.

Chatman kept his residents addicted. He forced them to relapse so he could traffic them for inflated and often useless urine testing and rehab that soaked insurers for $25 million in false claims. Some residents overdosed, some died.

A single bogus test can rake in hundreds of dollars from private insurers, Medicare or Medicaid. Chatman overdosed on greed. He’s now living in a sober home, of sorts. It’s a federal jail cell. Chatman was handed 27 years to shape up and dry out. Read full story