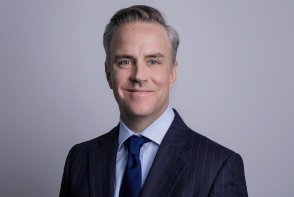 After many years, a leadership change is upon us at the Insurance Information Institute (I.I.I.), as Dr. Robert Hartwig, an economist and president of the I.I.I. since 2007, departs to join the faculty of the University of South Carolina’s Darla Moore School of Business.

The I.I.I. announced on July 13 that Sean Kevelighan, pictured at right, will assume the role of president and CEO of the I.I.I. on Aug. 8, bringing more than 18 years of public affairs, communications and media relations expertise to his new role. That includes leadership roles in the global property/casualty industry.

Kevelighan (pronounced Kevel-LYNN) will provide strategic oversight for the organization and act as a key spokesperson for the P/C insurance industry as a whole. For almost 60 years, the I.I.I. has provided definitive insurance information and expertise; its mission is to improve public understanding of insurance — what it does and how it works.

“Over nearly two decades, Sean has attained impressive accomplishments in public affairs and communications as well as a deep technical knowledge of insurance issues,” said Bruce Kelley, president and chief executive officer of EMC Insurance Companies in Des Moines, Iowa, and chairman of the I.I.I.’s board of directors. “The search committee screened dozens of high-caliber candidates, but the final vote was unanimous. Sean is an ideal fit for the CEO role due to his success as a media spokesperson in both corporate and government settings, as well as his international insurance industry experience.”

Kevelighan, age 43, was previously Global Head of Public Affairs for Zurich Insurance Group, where he was responsible for setting the corporation’s global public policy and corporate responsibility agendas. He moved to Zurich following a stint as Group Head of Global Consumer Banking Public Affairs for Citigroup, where he oversaw strategic communications for a business that serves more than 100 million customers worldwide and represents more than 40 percent of the company’s earnings. He has also worked as Head of North American Group Media Relations for Zurich, as well as in President George W. Bush’s Administration both for the Treasury Department and as Press Secretary for the White House Office of Management and Budget (OMB).

Dr. Hartwig, who was a key figure for the industry in the wake of the 9/11 terrorist attacks in 2001, will retain a formal relationship with the organization, periodically writing research reports, delivering presentations and offering testimony to public policymakers on the I.I.I.’s behalf.

• Check out the I.I.I.’s new Q&A with Bob Hartwig as he departs the I.I.I. to join the faculty of the University of South Carolina’s Darla Moore School of Business.

“Although my decision to leave the Institute after 18 years was an extremely difficult one, it is made much easier knowing that I will be leaving the organization in such capable hands,” said Dr. Hartwig. “I love this organization and this industry and I’m confident that Sean will be a strong, strategic leader for the I.I.I. and a persuasive spokesperson for an industry that I remain fully committed to.”

Dr. Hartwig will teach courses in risk management, insurance and corporate finance, including courses in the Moore School’s highly regarded professional MBA program. Dr. Hartwig, who has a Chartered Property Casualty Underwriter (CPCU) designation, will also become co-director of the Moore School’s Risk and Uncertainty Management Center.“Under Dr. Hartwig’s leadership, the I.I.I. bolstered its position as a thought leader in the industry and expanded dramatically the audiences who have access to the I.I.I.’s award-winning editorial content, data and subject matter expertise,” Kelley said.

Kevelighan will report directly to the I.I.I.’s board of directors; reporting to the President and CEO will be the Institute’s executive team including the Executive Vice President, Chief Economist, Chief Actuary, and Chief Communications Officer.

“It’s an honor to have been given this opportunity,” said Kevelighan. “Insurance is the lifeblood of any economy, as it enables individuals to be better prepared for the unexpected and, in turn, to live more freely. Over the years I have truly grown passionate about insurance and, quite frankly, feel it deserves more credit for the value it brings to society.”

“The I.I.I. has a long, credible and successful history of helping people understand the essence of insurance, and why it’s so critical to our everyday lives,” added Kevelighan. “I am eager and excited to build upon the extraordinary work of Bob and the I.I.I. team, and look forward to leading the organization and our members to further success.”